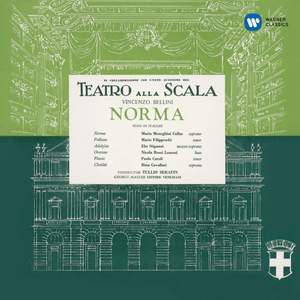 This is the first of Callas’s two complete recordings of her signature role, the druid priestess Norma, in which she has remained unrivalled for 50 years. It captures her voice in its imposing early prime, while in the two famous duets for Norma and Adalgisa she is partnered by Ebe Stignani, generally considered the greatest Italian mezzo-soprano of her era. The conductor is Callas’s mentor Tullio Serafin.