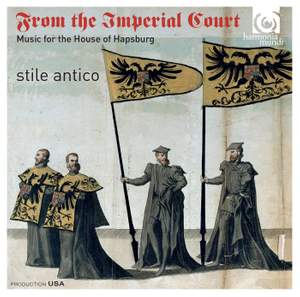 From the Imperial Court

Music for the House of Hapsburg

Superbly recorded, it is a masterclass in outstanding breadth of interpretation, balance and total teamwork … the group’s ‘worker’s co-operative’ ethos continues to reap dividends with, on this... — Choir & Organ, November 2014 More…

Interview,  Stile Antico - Music for the House of Hapsburg

David talks to the early music ensemble's Kate Ashby about their latest disc, 'From the Imperial Court'

One of Europe’s most extraordinary ruling dynasties, the Hapsburgs ruled greater or lesser portions of Europe from the 11th century until 1918, their heyday coinciding with the supreme musical flourishing of the 16th century. Their rule saw a particular increase during the reign of Maximilian I, secured first by his marriage to Mary of Burgundy in 1477 and then by the union of their son Philip ‘the Handsome’ with Joanna ‘the Mad’ of Castille. Thus his grandson Charles V essentially ruled Spain, Germany, Austria, Burgundy and the Low Countries, before he in turn divided his territories between his son Philip II and his brother Ferdinand of Austria in 1555-6. As these successive generations enlarged their power and territory, they gathered around themselves the leading composers of the day. Stile Antico present music closely associated with Maximilian I, Charles V and Philip II in this programme of sumptuous works by Thomas Tallis and the finest Spanish and Flemish polyphonists of the 15th & 16th centuries.

Superbly recorded, it is a masterclass in outstanding breadth of interpretation, balance and total teamwork … the group’s ‘worker’s co-operative’ ethos continues to reap dividends with, on this occasion, results almost approaching perfection.

Stile Antico reinforce their already formidable reputation: intonation and balance are always flawless; the sound of the voices is glorious, precise and absolutely crystal-clear; the music always moves along effortlessly with well-judged moments of pressure and relaxation, despite their having no conductor.

[a] well-chosen and beautifully recorded anthology of music for the Hapsburg court … The programme is extremely well conceived, and the booklet beautifully presented.

exciting and beautiful … Not only are the performances magically blended, but the recording captures this beautifully and weaves a web of sound around the listener, whether it’s in stereo or surround. In short, very good indeed.

a welcome return for Stile Antico to this continental repertoire … if this is the music of melancholy, who needs to be happy?