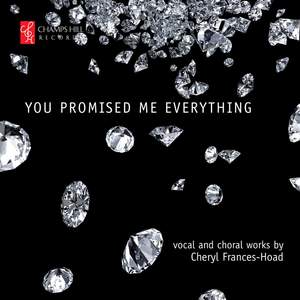 You promised me everything

Someone should commission a music theatre piece from Cheryl Frances Hoad: this disc reveals a dramatic instinct straining at the leash....Jennifer Johnston is a superb advocate, the glossy depth... — BBC Music Magazine, January 2015, 4 out of 5 stars More…

II. The Pros and The Cons

VII. In The Chill

Frances-Hoad: There is no Rose

Frances-Hoad: You Promised Me Eveything

IV. I Had A Fixed Purpose

V. In Off The Moors

VI. Then His Rage

X. A Lot was to Happen

XI. He Rippled Down The Rock

XII. Then He Drew Himself Up

Katherine talks to the up-and-coming British composer about two of the works on her new disc: a one-woman setting of Beowulf, and a response to Schumann's Frauenliebe und -leben.

RPS Award-winning young British composer Cheryl Francis-Hoad released 'The Glory Tree' (CHRCD021) on Champs HIll Records in 2011 and the label is delighted to continue to support her remarkable talent.

"...what comes out of these pieces....is a voice overflowing not only with ideas, but also with the discipline and artistry necessary to harness them." Kenneth Walton, The Scotsman

This recording of vocal and choral works is a more overt exploration of her fascination with narratives and features an array of young talent including mezzo soprano Jennifer Johnston, pianist Joseph Middleton, Gonville and Caius College Choir, and cellist Rebecca Knight.

One Life Stand takes Schumann’s iconic Lieder cycle Frauenliebe- und Leben (Women’s Lives and Loves) as an inspiration, but updates it with eight poems by the poet and crimewriter Sophie Hannah. Schumann's original, with verses by Chamisso is iconic, but in the words of Jennifer Johnston 'rather outdated’. One of the outstanding features of One Life Stand is the resourcefulness of its piano writing as it traces the course of a life-dominating relationship from the woman’s point of view from 'Brief Encounter' to 'Rubbish at Adultery'.

Cheryl wrote There is No Rose when she was just 14 for unaccompanied SATB choir, a magical part song.

Don’t! (2009) might be regarded as a little appendix to One Life Stand. Dedicated to Jane Manning for her 70th birthday, it quickly takes its singer over the top, out of tune, and out of breath as she runs through some urgent injunctions to be observed in the daily attempt to keep the marriage running smoothly.

Psalm No. 1 for SATB choir and organ was commissioned by Gonville & Caius College to celebrate the 800th anniversary of Cambridge University. It won a BASCA British Composer Award in 2010.

For an example of extraordinary vocal bravura one need look no further then the soaring and febrilely falling phrases of You promised me everything last night (2011), for soprano, cello and piano duet, which sets just those six words that make up the title.

The Nunc Dimittis (2000), scored for 21 solo voices, must be one of the most dramatic settings of the familiar words.

Someone should commission a music theatre piece from Cheryl Frances Hoad: this disc reveals a dramatic instinct straining at the leash....Jennifer Johnston is a superb advocate, the glossy depth of her voice matched by the spirited intelligence of her musicality.