You've got to love a song-cycle that includes the words 'My husband doesn't want to hold the plastic pelvis-model...': if, like me, you love Schumann's Frauenliebe und -leben but occasionally long for an explicitly female song-cycle with a bit more grit, then Cheryl Frances-Hoad's witty, irreverent and tender 21st-century take on 'A Woman's Life and Love' (out next Monday on Champs Hill) is definitely worth exploring. I caught up with the young British composer last week to discuss One Life Stand, and her stark, compelling setting of the Beowulf story for mezzo and piano (both sung on the recording with passion and power aplenty by her friend, the dramatic mezzo Jennifer Johnston). Here's what she had to say…

How and when did the idea to write an updated Frauenliebe arise, and how did you decide upon texts? Did you set existing poems, or work with a librettist specially for the project?

The idea for One Life Stand originated from a discussion over lunch in Cambridge with my friend Jennifer Johnston. She was bemoaning the fact that, although she loved to sing Schumannʼs Frauenliebe und -leben ('Womenʼs Lives and Loves'), and was always being asked to do so, she did find Chamissoʼs words rather outdated and suggested I write an updated version. I jumped at the chance, and by pudding we were already thinking about whose poetry I might set.

A few weeks later, during a meeting with Chris Gribble (Chief Executive of Writers’ Centre Norwich), he told us that the crime writer and poet Sophie Hannah had recently moved to Cambridge and had many suitable poems. It wasnʼt long before we all met up for lunch and began discussing the contenders for a series of poems that might portray a modern womanʼs life and loves. To begin with I had a list of about twenty five poems that I would have liked to set, taken from four of Sophieʼs poetry collections (The Hero and the Girl Next Door (1995), Hotels like Houses (1996), First of the Last Chances (2003) and Pessimism for Beginners (2007: all published by Carcanet Press), but the final eight in my view come together to form a narrative that is clear yet open to interpretation, and contains the whole gamut of complex emotions (both serious and humorous) that made the poems such a dream to set to music.

How much did you retain from Schumann's original cycle - either in terms of the basic narrative or harmonic/melodic ideas?

Although the idea for the work originated as a reaction to Chamissoʼs poetry, in the course of composing the cycle I found much inspiration from Schumannʼs song cycle, and many of the songs in my work are based very closely on either the harmony and/or the motivic material of what in my view is the “corresponding” song in Frauenliebe und -leben. In particular it has been Schumannʼs very varied (but always totally appropriate) use of piano textures that has been most inspiring, and the way that he treats the relationship between the voice and piano fascinates me: at times the voice is very independent from the piano, whereas at other points the piano doubles long phrases of the vocal line.

However, when the latter occurs there are frequently very subtle differences between the doubled melodic lines: a resolution of a suspension may occur a quaver earlier in the piano than in the voice for instance, and the tension and dissonance these small moments create seem to me to perfectly describe the yearning quality of the poems that this musical device features in. One of the wonderful things about writing a new composition that is a companion piece to a great work is that you get to know the original work from the “inside out” as it were, and it is often the subtlest nuances of texture and harmony that become most important inspiration.

In terms of the narrative, I think there are similarities in that each song cycle (in my view) is about one woman - but the woman in One Life Stand has quite different experiences from Schumann's subject!

How did you go about creating that stark, very pre-medieval sound-world for Beowulf? Did you go back and explore music from the time of the original poem, or perhaps other musical depictions of the period by later composer?

I was really influenced by a programme on BBC4 I saw about Beowulf, which featured a performance poet reciting the text incredibly dramatically. The strength and power of the poem didn't seem to need a great deal added to it to be honest! So I set about setting it in a way that relies heavily on speech rhythms (which in itself provides a great deal of inspiration - the way you speak when you are frightened is very different in pitch and rhythm to the way you speak when you are proud, etc). Beowulf as a man seemed to me a very 'no frills' kind of person, so I sought to convey this in the music: it's full of open 5ths in the piano - strong, no nonsense intervals, for instance. The keys are also influenced by the poem - there's so much gold in Beowulf - gold helmets, gold shields, etc etc, and gold to me suggests A major/minor tonalities etc...

Your setting of Beowulf is super-dramatic - virtually a miniature opera! - have you any plans to write a stage work?

I have actually! In 2012 I wrote a 90-minute opera with the librettist Adam Strickson about the pilot Amy Johnson for the Cultural Olympiad. I've also written several other operatic works in the past - but to be honest I think of almost everything in terms of opera, whether it's a 2 minute song or a full length opera! 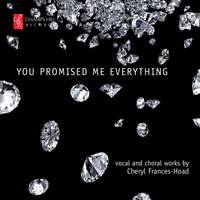 You promised me everything

'You promised me everything' is released on Champs Hill on Monday 8th September.

Other recent and forthcoming recordings of works by Cheryl Frances-Hoad 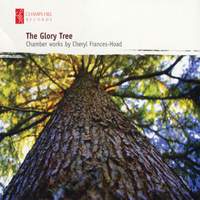 The Glory Tree, for soprano and small ensemble, is the centrepiece on this 2011 disc of Cheryl's chamber music, which also includes works for piano trio, oboe/cor anglais, solo clarinet, and cello ensemble.