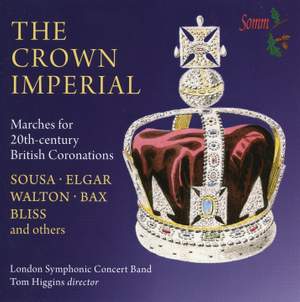 Britain witnessed four coronations in the 20th century. Four new monarchs came to the throne whose praises were played and sung throughout the land, indeed throughout the world. The 11 marches recorded here display an excitement and grandeur appropriate to an important state and religious occasion. They also highlight some of the finest ceremonial music composed in the 20th century, while reflecting the changing styles in music over the years. Some of these marches have never been recorded by a concert band before despite transcriptions being made soon after their composition, and our CD shows how, in times past, the public would have first heard these pieces. Many composers were either commissioned or inspired to commemorate these events, ranging from the ever-popular Elgar, Walton, German and Saint-Saëns to the less familiar Alexander Mackenzie, the forgotten Percy Godfrey through to the more contemporary Bax and Bliss.John Philip Sousa, the celebrated American composer and conductor also caught the spirit of the moment with one of his legendary marches. The newly formed London Symphonic Concert Band directed by Tom Higgins consists of seasoned, experienced players who have played for years in our British orchestras and relish the opportunity to perform and record repertoire that they obviously enjoy performing. Tom Higgins' previous recording for SOMM (SOMM243) was Elgar's The Fringes of the Fleet with Roderick Williams and the Guildford Philharmonic Orchestra. It was CD of the Week on Classic FM and rose high in the Specialist Classical Music Charts when it was released, in 2009.