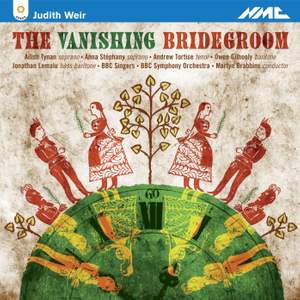 a composer of integrity, [Weir] communicates intelligently with different audiences and ages. This timely release of The Vanishing Bridegroom (1990), her most successful opera, underscores her... — Financial Times, 8th August 2014, 4 out of 5 stars More…

Act I: The Inheritance: The Deathbed: There was a man (Narrator)

Act I: I knew your father (Doctor, Sons)

Act I: The Passion: The Bride and her Lover (Narrator, Bride, Doctor)

Act I: I would sleep wherever his bed might be (Bride, Bridegroom)

Act I: He ended the wedding (Doctor, Bridegroom, Sons)

Act I: At the Lover's House: The Lover appears with a light (Narrator, Lover, Bride)

Act I: The Bride and the Good Robber vanish into the distance (Narrator, Doctor, Good Robber)

Act II: Towards the Hill: The Husband and the Friend set out (Narrator, Friend, Husband)

Act II: The Policeman and Friend leave in the direction of the Hill (Narrator)

Act III: The Stranger: The Daughter, alone on a hillside (Daughter, Chorus)

Act III: And she was to lie (Daughter, Stranger)

Act III: You are whiter than the swan (Stranger, Daughter)

Act II: Come away with me (Stranger, Narrator)

Act III: No fire shall burn me (Daughter, Stranger)

Act III: Hosts of angels on thy side (Chorus, Narrator)

Katherine talks to the composer (recently named Master of the Queen's Music) about her 1990 opera based on Scottish folklore, released this month on NMC Records.

Judith Weir's opera, commission by Glasgow District Council for the 1990 City of Culture celebrations, takes three Scottish folktales, all concerned with disappearance: The Inheritance features a runaway bride, a singing forest and a lost sum of gold; The Disappearance tells of a man abducted by supernatural forces; and The Stranger is the story of an independent-minded girl wooed by the devil in disguise.

Weir's writing combines lush descriptive soundscapes with ethereal choruses and Gaelic folk melodies; the romanticism of the three tales is offset by the sardonic humour and down-to-earth attitude of their protagonists, and of the composer herself.

Judith Weir's operas have been staged by the Royal Opera House Covent Garden, Bregenz and many others. • She was awarded the Queen's Medal for Music in 2007.

Weir has been commissioned by the CBSO, Boston Symphony Orchestra and the Minnesota Orchestra.

She celebrates her 60th birthday this year.

a composer of integrity, [Weir] communicates intelligently with different audiences and ages. This timely release of The Vanishing Bridegroom (1990), her most successful opera, underscores her gift for concision, ambiguity and sound-pictures of sophisticated lyricism.

Weir has always excelled at writing music in miniature, and her skill at pinpointing an idea, an atmosphere, a musical realm in a few deft strokes is fully on display in The Vanishing Bridegroom...A bleak atmosphere pervades the opera, yet the score is full of life.

The Vanishing Bridegroom is typical of Weir’s work for the stage, in its distilled swiftness, quirky wit and lack of pomposity. Much of the listener’s pleasure comes from joining up the dots for ourselves, if we want to make sense of these doggedly disparate folk tales taken from a mid-19th-century Scottish anthology.

this excellent recording by BBC forces of her 1990 opera shows why she is so highly rated. Weir ingeniously meshes three Scottish folk tales...conveyed in pithily sardonic music. Excellent performances, especially by Jonathan Lemalu in the title-role.

Weir’s textures never become muddy thanks to the excellent engineering and superb performances. Brabbins leads a well-paced reading that follows every twist and turn of Weir’s colourful score. Soprano Anna Stéphany and bass-baritone Jonathan Lemalu give particularly strong performances in the final tale.