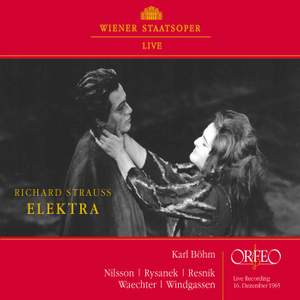 [Nilsson] is achingly tender in the recognition scene with Orestes, vividly obsequious as she lures Aegisthus to his death and tireless in her final, fatal dance...like Nilsson, [Resnik] really... — Gramophone Magazine, October 2014 More…

Following the scandalous 'Salome', it was with the radical, expressive violence of 'Elektra' in 1909 that Richard Strauss finally cemented his position as the leading German opera composer of his generation. The immense vocal and orchestral demands it makes remain undiminished and few singers have really been able to meet the murderous challenge of singing the title role. In the 1960s and ’70s, however, Birgit Nilsson was one, possessing as she did a powerful voice also capable of much subtlety. This live recording from the Vienna State Opera in 1965, in a production by Wieland Wagner, was conducted by the great Karl Böhm, and was a musical triumph. Not only did Böhm and Nilsson give full rein to the eruptive violence of Strauss’s setting but they also attended to the psychological details that the composer teased out of Hoffmansthal's text. They were aided in this by the orchestra of the Vienna State Opera and a cast that was homogeneous right down to the smallest roles. Leonie Rysanek sang the wistful Chrysothemis, in a role she made her own, and with her luminous soprano she was an ideal counterpart to Nilsson’s tortured heroine. As their adversary, their inscrutable mother Klytämnestra, the dusky-timbred Regina Resnik gave a superb performance. For the adulterous lover Aegisth, the State Opera engaged the legendary heldentenor Wolfgang Windgassen. Eberhard Waechter sang the part of Orest, and with his unmistakeable baritone he offered every possible nuance of this important character, driven by fate.

[Nilsson] is achingly tender in the recognition scene with Orestes, vividly obsequious as she lures Aegisthus to his death and tireless in her final, fatal dance...like Nilsson, [Resnik] really acts with her voice...[Windgassen] makes a forthright Aegisthus...The conducting is beyond praise.

the performance proceeds with a coherence and a unity of purpose that bespeak a true ensemble … this Elektra achieves its impact through the completeness of its musicality and technical mastery … With Varnay we get exceptional warmth and womanliness of tone, with Borkh overwhelming fierceness combined with painful vulnerability and a thrilling ‘flame’ in the voice. Both give full value textually, as does Nilsson … Highly recommended.

Böhm was always at his best in live Strauss and this is no exception. Nilsson simply has no equal in the role … the sound is clear enough for us to hear instrumentalists turning the pages of the score.

It features one of the most striking casts ever assembled for the work, though some of the individual singers can be heard to better advantage elsewhere...Böhm himself is at his absolute best, attaining almost unbearable levels of frenzy in places, yet also wonderfully detailed, even with the restricted, mono sound.