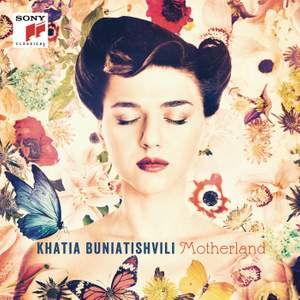 Behind the flowers, butterflies and soulful photos there lies some very classy piano-playing...Buniatishvili's playing is eloquent indeed: her voicing is expertly balanced in the opening Bach... — BBC Music Magazine, October 2014, 4 out of 5 stars More…

Mendelssohn: Song without Words, Op. 67 No. 2 in F sharp minor

Following the success of her Chopin album on Sony Classical, Khatia Buniatishvili now reveals a new, highly personal side on her album ‘Motherland’.

The CD is an intimate quest encompassing solo piano works from Bach to Pärt and from Brahms to Kancheli, in which the themes of longing for home, the merriment of a folk dance and the eternal cycle of growth and decay are apparent.

Spanning a broad stylistic and historical range, the album celebrates the works that have accompanied Khatia Buniatishvili’s personal path in life, including pieces from her Georgian homeland.

Motherland juxtaposes the happy lightness of a ‘Slavonic Dance’ by Dvorak and the melancholy of Grieg’s lyrical ‘Homesickness’, and contrasts the elegant gaiety of Mendelssohn’s ‘Song without Words’ (op. 67/2) with the graceful introspection of Liszt’s ‘Lullaby’. Classics of the Romantic piano repertoire such as Chopin’s Étude in C-sharp minor (op. 25/7) and Brahms ‘Intermezzo’ (op. 117/2) are embedded between Bach’s cantata ‘Sheep May Safely Graze’ and Arvo Pärt’s musical dedication ‘For Alina’.

Khatia Buniatishvili has been described by The Independent as “the young Georgian firebrand”. At the age of only 26 years, this Tblisi-born pianist has already achieved an exceptional maturity of interpretation and a distinctive artistic approach that make her playing unmistakable.

Khatia’s warm, sometimes sorrowful playing may reflect a close proximity to Georgian folk-music, which, she attests, has greatly influenced her musicality. Critics emphasize that her playing has an aura of elegant solitude and even melancholy, which she does not feel to be a negative attribute. “The piano is the blackest instrument,” she says, a “symbol of musical solitude… I have to be psychologically strong and forget the hall if I want to share it with the audience.” Khatia Buniatishvili speaks five languages and lives in Paris.

Behind the flowers, butterflies and soulful photos there lies some very classy piano-playing...Buniatishvili's playing is eloquent indeed: her voicing is expertly balanced in the opening Bach transcription and the Ravel Pavane, the phrasing sings wonderfully in the Tchaikovsky, Chopin and Scriabin...on the whole these are performances that get under your skin.

Without this musical crispness it might all be cloying. As it is, the disc holds one's attention.