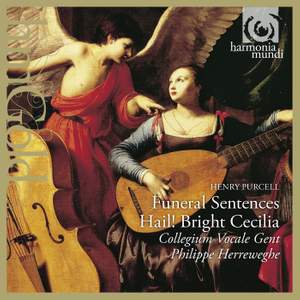 The sheer vitality-and the range of colour and character that Philippe Hereweghe and his musicians draw out of this music- makes these performances irresistible … beautifully sung and played. — International Record Review, September 2014 More…

V. Soul of the World!

VI. Thou tun’st this World

VII. With that sublime Celestial Lay

X. In vain the Am’rous flute

XI. The fife and all the Harmony of War

XII. Let these among themselves contest

II. Welcome to all the pleasures

V. Then lift up your voices

VI. Beauty thou scene of love

VII. In a consort of voices

Purcell: Rejoice in the Lord alway ('The Bell Anthem'), Z49

Purcell: Blow up the trumpet in Sion, Z10

Coupled here are Philippe Herreweghe’s two major Purcell recordings: the Funeral Sentences and a selection of full and verse anthems, was acclaimed by the American Record Guide for its "clarity and precision of English diction and outstanding choral intonation’ combined with ‘consistently beautiful" solo singing. Five years later, the maestro directed his virtuoso Collegium Vocale Gent in two highly contrasting glorifications of the art of which Purcell was a supreme master. Whether with the small forces of 'Welcome to all the pleasures' or in the vocal and orchestral pyrotechnics of 'Hail! Bright Cecilia', here is a genuine festival of music. These titles were released for the first time in 1993 (CD1) and 1998 (CD2) and have not been available for some time.

The sheer vitality-and the range of colour and character that Philippe Hereweghe and his musicians draw out of this music- makes these performances irresistible … beautifully sung and played.