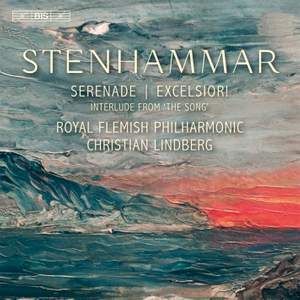 The symphonic overture Excelsior!, written for the Berlin Philharmonic Orchestra in 1896, was composed only four years after Stenhammar made his début as a composer. Stenhammar had not yet entirely found his own voice, but the work displays an infectious exuberance and enthusiasm, contrasting with the more reflective ‘Interlude’ from the composer’s final large-scale work, the cantata Sången from 1921.

Closing the disc is the Serenade in F major, often regarded as Stenhammar’s finest orchestral score.

This is the Royal Flemish Philharmonic’s first recoding for BIS.