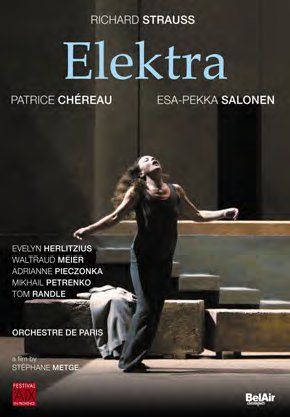 The last production ever staged by Patrice Chéreau, this 'Elektra' will remain as the most striking events of recent years in Aix-en-Provence.

"This production, with Esa-Pekka Salonen on the podium, the Orchestre de Paris in the pit, an all-star cast and Patrice Chéreau directing, has been hyped so hard that it would be gratifying to be able to enumerate its imperfections. But there are none. Chéreau, Salonen and their cast get everything so appallingly right… Chéreau takes Hofmannsthal’s chilling libretto to the letter, in the most minutely exacting manner, and Salonen does the same with the score, conducting with all the dispassionate clarity of the gore in a Tarantino film. If it were merely gore, it would be bad enough. Far worse, though, both men see every moment of tenderness in text and score in perfect detail.

These murderous family members are not monsters. They are real people, filled with love and yearning, damaged beyond repair.

Evelyn Herlitzius lives and breathes the mammoth title role. She is a wild animal, a dirt-smeared urchin in oversized men’s clothes, her wiry body barely containing the huge, disturbing emotions of her matricidal character. Her jerky, broken dance is one of this production’s many unforgettable moments. The opening night audience leapt to its feet to applaud her.

As her far more feminine sister, Adrianne Pieczonka is a revelation, with a lavishly creamy voice capable of expressing all the emotions that Elektra forbids herself. Waltraud Meier’s Klytämnestra is so dignified as to be almost harmless, a frail figure whose subsequent slaughter seems out of proportion to her errors. The men are strong, led by Mikhail Petrenko as an unnervingly compassionate Orest.

Richard Peduzzi’s sets and Caroline de Vivaise’s costumes set the action somewhere that could be the vestiges of any modern conflict, from the Balkans to Afghanistan, a grey, comfortless world of concrete, fear and oppression. Under Salonen’s merciless direction, the Orchestre de Paris gives the lie to preconceptions about French orchestras and German romanticism, with playing that is transparent, brawny and seductive all at once.

The whole is so horribly compelling that it is hard to remember to breathe, and even harder not to join Elektra in eager passion for the closing bloodbath. Chéreau does not even bother with blood; in the end, Orest strangles his mother. It is vile, and utterly wonderful.

This production goes on to La Scala, Milan, the Metropolitan Opera in New York, the Finnish National Opera, the Liceu in Barcelona and the Staatsoper Berlin. It has all the strengths of Chéreau’s legendary staging of Janácek’s 'From the House of the Dead'. Its shelf life will be long, and it will be talked about for even longer. A triumph for Aix." *****Shirley Apthorp, Financial Times

Herlitzius as the vengeful daughter is vocally tireless...Chereau exacts similarity intense, realistic performance from Adrianne Pieczonka as Chrysothemis...Other crucial elements in a total theatrical experience are Richard Peduzzi's colossal set and Esa-Pekka Salonen's conducting, which is visceral throughout. This is one of the truly indispensable opera DVDs.

this is a remarkably absorbing Elektra, energised not just by Evelyn Herlitzius’ gritty anti-heroine and Waltraud Meier’s unclichéd Clytemnestra, but by Chéreau’s decision to show the two revenge-murders onstage. The DVD includes a charming and revealing 23-minute interview with the director

It is Herlitzius's performance and the finely detailed, well-balanced conducting of Esa-Pekka Salonen...that are the main selling points...One of Chereau's innovations is to have Klytemnestra played relatively straight, rather than as the neurosis-addled monster she can be...Pieczonka is a terrific Chrysothemis, tearing into the role with luscious tone that thins only occasionally.

Herlitzius’s vocal stamina is striking. Her voice is full and strong, rings out powerfully and even cuts through the loud orchestra … Pieczonka is splendidly focused of voice, cutting through the orchestral sound with a genuine shine on the tone … Salonen energises the orchestra … a winning one [performance] altogether.

I found Herlitzius powerful and interesting, but never beautiful...the lyrical beauty of Adrianne Pieczonka’s Chrysothemis is a welcome contrast...Meier brings a star touch to Klytämnestra...She holds you spellbound for the half hour in which she is on stage...Petrenko is a marvellous Orestes; rich, authoritative, boomingly resonant and always musically involving.

[Herlitzius] has made this opera her own, and watching her sensationally acted and searingly sung performance from Aix, it is easy to understand why. Her physical commitment to her role, and her unstinting, occasionally wild, vocalism are astounding...Salonen gets sensuous and dramatic playing from the OdP. A classic.

[Chereau's] Elektra shares many of the radical, unsparing qualities that distinguish his finest work. Typically, he dispenses with cliche, and in place of the snarling, expressionist approach found in most stagings, offers a humane modern-dress drama...Salonen conducts the Orchestre de Paris with a grave eloquence that places as much emphasis on the score’s moments of lyrical repose as on passages of churning anguish.

Chéreau himself operates with deadly restraint...There’s nothing utilitarian about the cast, though, least of all its Elektra. Precise in pitch, unfailingly intense and charismatic, the German soprano Evelyn Herlitzius conquers every challenge...The rest of Elektra’s cracked family receive equally striking portraits.

Chéreau has deliberately rejected the expressionist clichés usually associated with productions of Elektra for something more thoughtful and dramatically cohesive…Herlitzius is exceptional in the title role, delivering top notes that are searing and incisive, while Adrianne Pieczonka gives a riveting performance as Chrysothemis…Strauss’s compelling score is given a wonderfully lyrical reading.