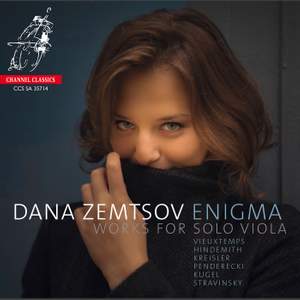 A 57-minute sequence of searching pieces for unaccompanied viola sounds like a disc of a certain austerity, and so it is, an exploration of music typically cast in “thick vital layers”, to use... — Sunday Times, 15th February 2015 More…

Unlikely other stringed instruments the viola repertoire hasn't been as thoroughly explored, but this colourful anthology of music for solo viola contains some of the most challenging works. Famous for her soulful dedication to the viola Dana Zemtsov takes the listener along to a world of warm, deeply touching sounds. She wants to warn the listener for the music on her debut recording: ... here one will scarcely find lyrical melodies and heart-warming beauty with which music is so often associated. Instead, there will be tales of war, perplexed wanderings through obscured labyrinths, intense cries of despair, sour tears of sorrow, maybe at places an ironic grinn... For 2014 and 2015 Channel Classics and Dana agreed on two more recordings, one with piano accompaniment and another with orchestra.

Winner of numerous competitions and developing an outstanding career, Dana Zemtsov (b. 1992) is one of the most promising international viola soloists of her generation.

Highlights in the 2012 / 13 season include Dana’s performance of the Bartók Viola Concerto in the Great Hall of the Concertgebouw in Amsterdam, chamber music with Janine Jansen and Martin Frost during the Utrecht Chamber Music Festival and a recital in Carnegie Hall of New York.

Dana is First Prize laureate of several competitions in Luxemburg, Italy, Austria, Germany, Portugal and the Netherlands. In 2010 she won the Dutch Television competition ‘Evening of the Young Musician’ becoming the ‘Young Musician of the Year’ and representing The Netherlands at the Eurovision Young Musicians Competition in Vienna. Dana is regularly appearing on the most important international stages and festivals as well as chamber music partner as soloist. Dana Zemtsov was born in 1992 in Mexico City. She comes from a family of musicians. At the age of 5 she received her first music lessons from her grandmother and from her parents, both viola players, Mikhail Zemtsov and Julia Dinerstein. Since 2012 she studies with the famous viola virtuoso Michael Kugel.

A 57-minute sequence of searching pieces for unaccompanied viola sounds like a disc of a certain austerity, and so it is, an exploration of music typically cast in “thick vital layers”, to use Zemtsov’s phrase in her booklet preface. Her acts of decipherment are, however, compelling — the tone as seductive as the intelligence behind it is palpable.