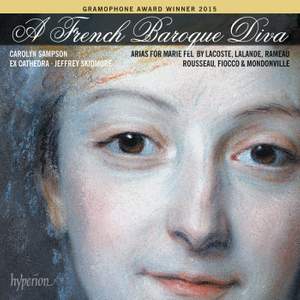 Sampson is quite remarkable. She has the capacity to soften the vocal line with carefully controlled vibrato, but also deploys tone of crystalline clarity...bright, vibrant, responsive and entirely... — BBC Music Magazine, August 2014, 5 out of 5 stars More…

Carolyn Sampson on her new disc of French baroque music with Ex Cathedra.

A welcome return of Carolyn Sampson and Ex Cathedra to Hyperion, performing the rich, fulsome music of the French Baroque. Their recording of love songs from Rameau’s operas (Hyperion CDA67447) was hugely acclaimed for Sampson’s stylish, fluid, seductive performances, and ten years later her artistry is even more dazzling.

This album is of particular interest as rather than concentrating on one composer it showcases the works written for the premiere soprano of the day, Marie Fel. Voltaire called her his ‘adorable nightingale’. For d’Aquin, she was an enchanted being. Marie Fel was the soprano who held an entire generation spellbound at the Paris Opéra and at Louis XV’s court during one of the most glorious periods of French music. With a voice described as ‘pure, charming, silvery’ (La Borde), ‘touching and sublime’ (Grimm) and ‘always lovely, always seductive’ (d’Aquin), she inspired some of Jean-Philippe Rameau’s finest music and introduced a whole new level of virtuosity and expression into the French singing tradition. Her long, triumphant career is traced through this fascinating recording.

Sampson is quite remarkable. She has the capacity to soften the vocal line with carefully controlled vibrato, but also deploys tone of crystalline clarity...bright, vibrant, responsive and entirely in tune with the expressive language and virtuosic demands of the period.

don't be put off by the apparently recherche repertoire: this is a programme that leases as much today as it did in [Fel's]...the longer we listen to Sampson's voice, the more she seems to inhabit the aura of Fel...Sampson's performance is the more admirable for evoking the spirit of another singer. Start to finish, Jeffrey Skidmore devotedly shapes and paces the programme.

Sampson is here in glorious voice. She turns ornaments with the exquisite skill of a master jeweller. The support from Skidmore and his excellent chorus and orchestra is unfailingly accomplished and idiomatic. It is difficult to envisage a more fitting tribute to one of the great divas of the past, a singer of whom her friend Voltaire said, ‘Those who have only ears, admire you; those with feeling as well as ears love you.’

I’m sure Jeffrey Skidmore and Ex Cathedra won’t mind me saying this is a very English interpretation...Sampson sings it all beautifully: words, affect, heart and spirit in everything, plus the most natural-sounding control in the coloratura. A really lovely disc of rare and beautiful music, performed with love.