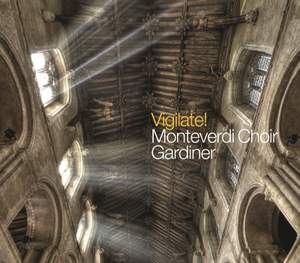 Tomkins: Almighty God, the fountain of all wisdom

The title Vigilate! (Be watchful!) epitomises the clandestine character of recusant music-making in Elizabethan England, by undercover Catholic composers of the time.

The pieces on this recording display the richly imaginative, devout and diverse responses of musical craftsmen who worked with unfailing creativity in difficult times.

The album comes in our usual casebook packaging and contains a 36 pages booklet with notes by Kerry McCarthy and texts in German, English and French.

In March 2014, the Monteverdi Choir will be celebrating its 50th Anniversary

The 16th and 17th centuries were turbulent times in England...The works on this disc expose those liturgical struggles very clearly...The fairly large forces tend to produce an unusually robust sound for this repertory, though musicality is never lost.

It is rare nowadays for the Monteverdi Choir to venture as early as the English Renaissance; and it equally rare to hear a motet recital of this period sung by an ensemble that is so audibly a mixed choir with a forceful personality at the helm...Refreshing on one level, this very directed approach seems a throwback to another age.

this set of performances offers a different perspective on this music compared to what one would experience from hearing a smaller consort sing it. I welcome both approaches and I find Gardiner and his superb choir are very persuasive and stimulating guides to this repertoire.