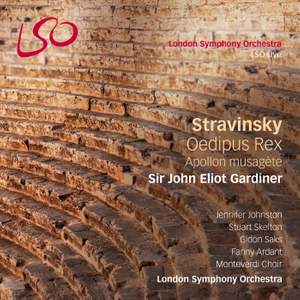 Recording of the Week,  Stravinsky's Oedipus Rex from the LSO

James takes a trip to Ancient Greece with John Eliot Gardiner and the LSO’s muscular renditions of Stravinsky’s Oedipus Rex and Apollon musagète.

Sir John Eliot Gardiner conducts the LSO on this his first release for LSO Live, Stravinsky’s 'Oedipus Rex' and 'Apollon musagète'. Also featured on the release are the gentlemen of the Monteverdi Choir, considered one of the world’s leading choirs, and a mix of international and home-grown soloists including Jennifer Johnston and Stuart Skelton. French actress Fanny Ardant, who has appeared in more than 50 motion pictures, takes the rôle of narrator.

'Oedipus Rex' and 'Apollon musagète' are both ancient Greek-themed works by Stravinsky. The rich string harmonies and textures in the ballet score of 'Apollon musagète' are pleasantly mesmerising, expressive and calmly indulgent. In contrast, the dramatic and hauntingly compelling opera-oratorio 'Oedipus Rex' is composed of an assemblage of monumental and powerful sounds, such as playful woodwinds, robust brass and agile strings, with magnificent vocals from the choir and soloists.

Sir John Eliot Gardiner is touring a programme of Mendelssohn Symphonies with the LSO to France and Switzerland during January and March, after which the orchestra head, with Daniel Harding, to the Far East. Gardiner's Monteverdi Choir celebrate their 50th anniversary in 2014 in March with concerts in France and Spain, performing Monteverdi’s 'Vespers'.

[Ardant] is, throughout, classical but also personal...Without distorting the form, [Gardiner] allows his singers more expressive freedom than is usual...[Skelton] brings increasing tension into his interpretation...Johnston takes Jocasta's elaborate coloratura full tilt, bringing her aria off with great aplomb...Saks makes a tough Creon.

[Ardant's] remarkably husky delivery of Cocteau’s text was so integral to the drama of the piece that it had me enthralled every time...Gardiner gives us an extremely punchy performance...[Skelton] copes with the high tessitura admirably...Jocasta is impressively sung by Jennifer Johnston...I was completely convinced by every aspect of this performance.

The clarion tones of Stuart Skelton’s Oedipus are imperfectly caught by the LSO microphones, but Jennifer Johnston’s lush-toned Jocasta and the men of Gardiner’s Monteverdians excel.

the performance, by the London Symphony Orchestra and 24 men from the Monteverdi Choir, is admirably clear, precise and hard-edged; the soloists are adequate; and the coupler — Stravinsky’s startlingly romantic Apollon Musagète ballet for string orchestra — is gorgeous.