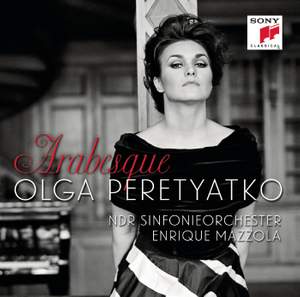 As a technician, the Russian soprano is little short of stupendous, and there are some extraordinary displays here of passage work, pinprick staccatos and stratospheric high notes. Interpretatively,... — The Guardian, 8th May 2014, 4 out of 5 stars More…

Russian soprano Olga Peretyatko was born and raised in St. Petersburg. She started her musical career at the age of 15, singing in the children's choir of the Mariinsky Theatre. She completed a course as a choirmaster and then enrolled to study singing at the Hanns Eisler-Hochschule für Musik in Berlin. Between 2005 and 2007 Olga Peretyatko was a member of the opera studio at the Hamburg State Opera. Engagements at the Deutsche Oper Berlin, the Berlin and Munich state operas, the Théâtre des Champs-Elysées in Paris, La Fenice in Venice, at the Rossini Opera Festival in Pesaro, and at the Festival La Folle journée de Nantes followed.

Olga Peretyatko gained international attention as Stravinsky’s Rossignol in the acclaimed Robert Le Page production premiered at the Aix-en-Provence Festival in 2010, followed by performances in Toronto, New York, Lyon and Amsterdam. She achieved great success in her role debuts as Adina in L’elisir d’amore in Lille, as Lucia di Lammermoor at the Teatro Massimo Palermo, as Gilda in Rigoletto at La Fenice in Venice, as well as at the Festival Avenches.

Recently, Olga Peretyatko debuted successfully as Giulietta (I Capuleti e I Montecchi) in Lyon and Paris. In Lausanne she made her debut in the title role of Handel’s Alcina, and in Amsterdam her role debut as Fiorilla (ll Turco in Italia). Substituting for a colleague at the last minute, her performance of Adina in L’elisir d’amore during the Pfingstfestspiele in Baden-Baden was highly acclaimed by the media and the public, as was her debut Lucia di Lammermoor at the Deutsche Oper Berlin. She also received the highest acclaim at the Rossini Opera Festival in Pesaro as Matilde di Shabran in summer 2012 which will be released on DVD.

Besides her opera career she continuously gives recitals and concerts throughout Europe. In 2015 Olga Peretyatko will debut as Violetta in La Traviata at the Opéra Lausanne, followed by a new production of the same title at the Festspielhaus in Baden-Baden.

As a technician, the Russian soprano is little short of stupendous, and there are some extraordinary displays here of passage work, pinprick staccatos and stratospheric high notes. Interpretatively, however, she takes a while to get going...at the halfway mark, she launches into the waltz-song from Gounod's Mireille with infectious joy, the fun starts, and by the end you're completely won over.

This recital showcases her accomplishments. The voice is Germanic in flavour, firm, clean and bright without shrillness...Peretyatko sings with copybook precision, but the lack of light and shade makes the entirety of the recording rather exhausting.