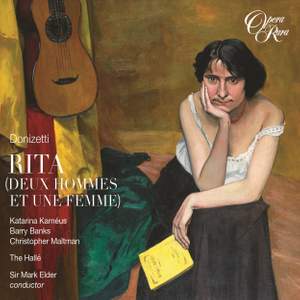 The two men...both sing and speak French perfectly. Unfortunately, although Katarina Karnéus is on lively, lovely form, her French when singing is almost indecipherable...The singers make a great... — BBC Music Magazine, June 2014, 4 out of 5 stars More…

Written in 1841, Rita, an opera comique in one act, was composed by Gaetano Donizetti to a French libretto by Gustave Vaëz. It was never performed in Donizetti’s lifetime and premiered posthumously at the Opéra-Comique in Paris on 7 May 1860. Opera Rara’s new release is a double first – the first recording of the newly restored critical edition of the score, in the original French, and our first project with the critically acclaimed, Hallé, conducted by Sir Mark Elder (Music Director, the Hallé and Artistic Director, Opera Rara) with Katarina Karénus (Rita), Barry Banks (Pepé) and Christopher Maltman (Gasparo). This 1CD set comes with a fully illustrated booklet with a complete libretto and English translation and informative note, by Francesco Bellotto, about the opera.

The two men...both sing and speak French perfectly. Unfortunately, although Katarina Karnéus is on lively, lovely form, her French when singing is almost indecipherable...The singers make a great team, but what makes it so much fun is Mark Elder's immersion in the work, which sounds almost as if it was Haydn on top form.

Rita can hardly be described as a masterpiece, but you cannot mistake its French comic style...While it might have been preferable to have native French speakers, Katarina Karnéus, Barry Banks and Christopher Maltman bring Rita to life with infectious spirit.

Katarina Karnéus’s Rita is richly voiced, if missing some bite—both on the text and in the tone. The same could be said of Christopher Maltman, a touch too mellow and affable as Gasparo. Barry Banks, with his sharper vocal focus, seems to capture the ruthless, protoOffenbachian mood most aptly—and, crucially, he camps things up a little more. All three handle the spoken dialogue with panache.

The lively score is deftly conducted. Katerina Karneus, Barry Banks (Pepé) and Christopher Maltman (Gasparo) have unidiomatic French, but their voices give pleasure.