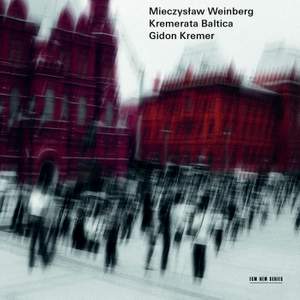 The music of Mieczyslaw Weinberg is finally beginning to get the hearing it has long deserved. Weinberg’s lifetime spanned the 20th century: born 1919 in Warsaw, he died 1996 in Moscow, in semi-obscurity. Along the way, his allies and supporters had included Dmitri Shostakovich, who considered him one of the great composers of the age. This double album by violinist Gidon Kremer and his Kremerata Baltica, recorded in Neuhardenberg and Lockenhaus, makes an excellent case for that claim.

Effectively a portrait album, it opens with one of Weinberg’s most remarkable creations, the extraordinary and complex third violin sonata of 1978 brilliantly performed by Gidon Kremer. The violinist ranks this work alongside Bartók’s Sonata for Solo Violin as one of the masterpieces for the instrument. With friends (including star pianist Daniil Trifonov) he explores some chamber music - the Trio op 48 (composed 1950) and the Sonatina op.46 (1949) - and the commitment and skills of the Kremerata musicians are brought to bear on two strikingly-contrasting compositions for string orchestra, the graceful and lyrical Concertino op. 42 (1948) and the adventurous and gripping Symphony No 10 (1968), bringing 12-tone rows and chordal structure into unexpected juxtapositions.

Their other ECM recordings are Hymns and Prayers with works by Tickmayer, Franck and Kancheli; a pairing of the adagio of Mahler’s unfinished Symphony No 10 and the 14th Symphony of Shostakovich; Schubert’s G Major String Quartet orchestrated by Victor Kissine; Gubaidulina’s Lyre of Orpheus; Kancheli’s In l’istesso tempo; Kissine’s Between Two Waves, and, in the Edition Lockenhaus box set, Messiaen’s Trois petites Liturgies de la Présence Divine and Strauss’s Metamorphosen.

Kremer himself opens his survey with a masterly account of the Sonata No. 3...The other three works...show the composer's more genial side. Kremer and his colleagues are in tune with that too...his interpretative daring and technical resources bring out qualities others miss and make each piece more urgently communicative than ever before.

Kremer’s playing is superb as one would expect and shows complete understanding of the material by a violinist who has clearly lived with the work for some considerable time. The Kremerata Baltica is a fantastically impressive ensemble whose every fibre is strained to ensuring readings of the highest quality.

There's one startingly impressive work here, the Third Sonata for unaccompanied violin from 1979, which Kremer delivers with the unswerving commitment and intensity he brings to everything he tackles, familiar or unfamiliar, and making his comparison of it with Bartók's solo sonata not at all far-fetched.