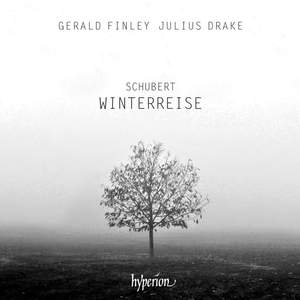 Perhaps more than any other recording the singer and the pianist are in equilibrium...if often sounds as if Julius Drake has just had an idea - and they are all good ones - and Gerald Finley... — BBC Music Magazine, May 2014, 5 out of 5 stars More…

The Gramophone-award winning partnership of Gerald Finley and Julius Drake turns to perhaps the most celebrated song-cycle of them all. Schubert’s Winterreise is a masterpiece of despair, astonishing in its bleakness and enthrallingly mesmerizing as the journey continues. Finley brings all his considerable dramatic powers to his performance—and all but submerges them under the ice.

Richard Wigmore writes that ‘before Winterreise Schubert had composed individual songs of pathos and despair, even of apocalyptic terror. What was new about the cycle was the spareness and angularity of much of the writing, the work’s sustained godless pessimism and its obsessive exploration of a mind veering between delusion, ironic self-awareness and nihilistic despair. The water music, limpid, turbulent or benedictory, of Schubert’s earlier Müller cycle, Die schöne Müllerin, yields in Winterreise to musical emblems of trudging and stumbling, bareness and exhaustion, derangement and frozen, trancelike stillness’.

Perhaps more than any other recording the singer and the pianist are in equilibrium...if often sounds as if Julius Drake has just had an idea - and they are all good ones - and Gerald Finley picks up on it; or vice versa...This, to my mind the greatest of all bleak works of art, here receives its perfect rendering.

Finley can exercise his lyrical powers in such songs as 'Der Lindenbaum'...but it is not a lyrical talent alone: more to the point, it is the spectrum of tonal colouring, inflection and instinctive phrasing which lend this performance of Winterreise such an absorbing sense of inner communion with the soul.

one of the finest [Winterreises] I have ever heard. The merits of Finley's singing are well known. The beauty of his voice is a good place to start, and even referring to such matters as intonation and line seems impertinent when dealing with singing such as this.

Finley's [reading] is inward, poised, heartbreaking in holding back. The more quietude he brings to each song...the more potent his reading. Julius Drake, accompanying, is equally lyrical, fluent, expressive. Neither lets the music shout...The disc lends itself to repeated exploration