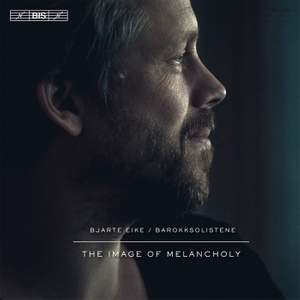 The Image of Melancholy

The results will appeal to anyone keen on folk and fusion or those looking for an alternative approach to early music. The lush, up-front recording, with its potential for 5.0 surround sound,... — BBC Music Magazine, May 2014, 3 out of 5 stars More…

Eike: Savn (A tune for Signe)

Biber: Mystery Sonata No. 9 in A Minor 'Jesus Carrying the Cross'

Mystery (Rosary) Sonata No. 9, "Jesus Carries the Cross": I. Sonata

trad.: Bansull (arr. J. Balke and B. Eike for voice and chamber ensemble)

Holborne: Last Will and Testament

Ó Catháin: Tabhair dom do lamh (Give me your hand) (arr. B. Eike for chamber ensemble)

Niel Gow: Niel Gow's Lament For The Death Of His Second Wife (arr. B. Eike for chamber ensemble)

Conceived by the baroque violinist Bjarte Eike for his period band Barokksolistene, this programme is his very personal ‘image of melancholy’. As he writes in his liner notes, ‘for me, melancholy is not only synonymous with sadness and despair, it is a state also harbouring reflection, meditation and relief.’ The connection between music and melancholy is far from new – at least since the time of the ancient Greeks, and probably long before them, there has been a belief that music has the power to influence our mood, to alleviate sadness or melancholy – or to induce it. Melancholy has at various times been the height of fashion – think of John Dowland, whose motto was: ‘Semper Dowland, semper dolens’ (‘always Dowland, always mourning’). Dowland is of course included here, as is his near-contemporary Anthony Holborne – but there are also a number of later pieces, as well as folk music from Eike’s native Norway and elsewhere. This music, writes Eike, ‘does not belong to any particular style, nationality or period in time; it’s rather a string of tunes that have all had a personal significance to me, and that together form a musical matrimony between a Nordic melancholy, the rich sounds of the Elizabethan consort and a modern approach to music-making.’ Joined by the soprano Berit Norbakken Solset and by the jazz pianist Jon Balke, Eike and his ensemble have created an intensely atmospheric and highly suggestive disc, which richly lives up to its motto – a quote by Victor Hugo: ‘Melancholy is the pleasure of being sad.’

The results will appeal to anyone keen on folk and fusion or those looking for an alternative approach to early music. The lush, up-front recording, with its potential for 5.0 surround sound, means one can positively wallow in exquisite misery.

There is sweetly fragile singing from soprano Berit Norbakken Solset...With its authenticity and quiet ability to move, it is one to lose yourself in on long winter nights.

The recording is perfect, the music capable of transporting us to far away - geographically, but also more importantly on those priceless inner wanderings which can show us more about ourselves than we imagined.