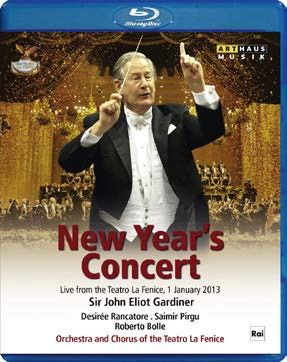 In 2013 Sir John Eliot Gardiner made his second appearance as conductor of the traditional New Year’s Concert in the traditionrich Gran Teatro La Fenice di Venezia – together with La Scala in Milan and San Carlo in Naples one of Italy’s most famous opera houses. Traditionally, the popular Concerti di Capodanno not only bring in the New Year musically, but also mark the opening of the new opera season which in Venice, contrary to general custom, begins with the calendar year. At the same time they give the opera house’s resident ensemble, the Orchestra e Coro del Teatro La Fenice, a perfect opportunity to show off their musical prowess. On the programme of the 2013 concert, in addition, of course, to brilliant gems from the work of this year’s bicentenarian Giuseppe

Verdi, was Pyotr Ilyich Tchaikovsky’s Second Symphony in C minor, Opus 17 – a relatively rarely performed piece that is undeservedly overshadowed by the Russian romantic’s last three works in that genre. The fiery galop from Gioachino Rossini’s French opera Le siège de Corinthe rounded off the program, in which Italian soprano Desirée Rancatore and Albanian tenor Saimir Pirgu took over the Verdi arias – amongst them Violetta’s “Sempre libera” and of course the brindisi “Libiamo ne‘ lieti calici” from La Traviata.