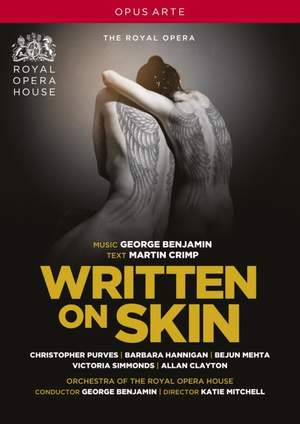 This is an outstanding release in every way...Benjamin's extraordinary music is breathtaking in its lightly worn compositional virtuosity...The cast is sensational...Hannigan deserves all the... — BBC Music Magazine, April 2014, 5 out of 5 stars More…

When Written on Skin had its premiere at the 2012 Festival d'Aix-en-Provence, conducted by George Benjamin himself, it received a standing ovation. The opera's arrival at Covent Garden in 2013 was eagerly anticipated, and provided audiences with the opportunity to experience the work of two of Britain's greatest living artists. Benjamin previously collaborated with playwright Martin Crimp on Into the Little Hill, a magical retelling of the Pied Piper fairytale, and for this new work they joined forces with acclaimed stage director Katie Mitchell. For all three, the production marked their main-stage debut at the Royal Opera House.

The tale, inspired by a medieval legend, tells of an ill-fated troubadour, drawn into a liaison with an innocent maiden. But they are observed by the jealous eye of her protector, who wreaks a shocking revenge on the young couple.

Written on Skin draws on a 12th-century Occitan legend about the troubadour Guillaume de Cabestanh.

Extra features: Interview with George Benjamin, Introduction to Written on Skin and a Cast gallery.

This is an outstanding release in every way...Benjamin's extraordinary music is breathtaking in its lightly worn compositional virtuosity...The cast is sensational...Hannigan deserves all the superlatives in the dictionary...make no mistake: this is a true masterpiece.

Benjamin’s score ranges from passages of exquisite iridescence, revealing his debt to Debussy and Ravel, to climaxes that explode with an orchestral violence new to his work...The cast is excellent, especially Barbara Hannigan as the wife, combining vocal trapeze-work with a thoroughly modern dramatic intensity, and Christopher Purves in the Golaud-like role of the husband...A new opera that will surely repay repeated viewings.

Benjamin's contribution is the most consistently impressive facet...Mehta makes much of the Boy's enigmatic presence without ever becoming a cipher for the vulnerabilties of others...The DVD conveys much of the claustrophobic power of this production...Make no mistake, this is an opera certain to endure.

This is one of the best filmed operas I’ve ever seen...Williams’ intelligent direction would be meaningless if the cast could not deliver: but they do … and magnificently. The quality of the acting is absolutely superb.

The vocal writing for the most part feels intimate and conversational...Mehta touches chords of the unearthly...More mesmerizing still, Barbara Hannigan's Agnès displays a fawnlike persona that belies the maelstrom within...Hannigan's rounded, lyrical soprano makes music even of her most jagged lines, clear up to a sustained, climactic "scream" on high C.