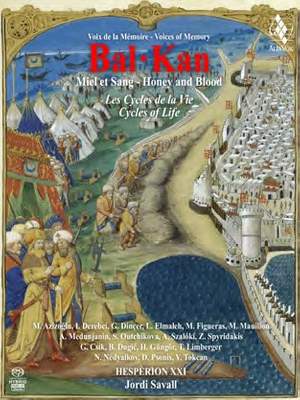 The name of the Balkans has an unusually graphic etymology: having discovered the beauty of this pivotal part of Europe, which stretches from Italy to the Bosphorous, and the ruggedness of its people, who put up fierce resistance to invasion, the Turks chose to describe ̀the region with the words Bal (Honey) and Kan (Blood). Honey & Blood: never was there so apt a metaphor! So much richness and drama packed into such a small area is guaranteed to fire the imagination of historians and artists, especially musicians.

Thanks to the magic of an ambitious programme built around the cycles of life, Jordi Savall invites us to travel the length and breadth of a region which has always had more than its share of human and historical drama. 230 minutes of music scan the full range of human emotions illuminated by 1001 different musical traditions, all of which nevertheless spring from a common source.

"The future belongs to those with the longest memory", wrote Nietzsche. Once more, Jordi Savall brilliantly demonstrates that music is a key component of the collective memory that enables us to face our future. This lavishly documented CD-Book, translated into 12 languages, is a must for any self-respecting collector. Fans of Jordi Savall's comprehensive documentary editions will need little prompting.