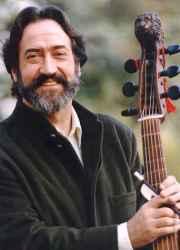 Jordi Savall, born in 1941 in Barcelona, embodies the spirit of the rich Catalan culture in which he was raised. Inspired by another great Catalan artist, Pablo Casals, whom he heard perform at Prades, the young Jordi Savall realized that music could be more than just a profession - for him, it would become an all-consuming life's work. He completed his cello studies at the Barcelona Conservatory in 1965 and, seeking to broaden his musical horizons, took an interest in early music.

Jordi Savall is widely credited with the rebirth of the viola da gamba, an instrument which has been all but ignored since the late 17th century - the period of its greatest exponents, François Couperin, Marin Marais and Antoine Forqueray. Savall's ongoing musicological research - uncovering works of previously unknown composers such as Coperario, Cererols, Ferrabosco, Ortiz, and Guerrero - has made him a major force in the revival of early music.

Find out more at https://en.wikipedia.org/wiki/Jordi_Savall

Jordi Savall creates an homage to the city of Jerusalem through an evocation of its rich history of more than 3000 years, bringing together Jewish and Palestinian musicians as well as performers from Iraq, Armenia, Turkey, Morocco and Syria.