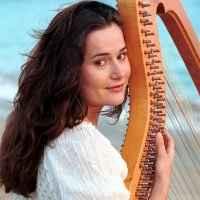 Born in Basel, Switzerland in 1972, into the heart of a family of Catalan musicians, Arianna Savall, after an initial stage of general and musical education, began to study classical harp at the age of ten, and after returning to Barcelona, continued under the direction of Magdalena Barrera. She concurrently began to study voice at the Conservatory of Terrassa with María Dolores Aldea in 1993. She was awarded her professional qualification in harp from the Conservatory of Terrassa in 1996, and that of voice in 2000. In 1992, she began studies in historical performance with Rolf Lislevand at the Conservatory of Toulouse (France), and took several courses under the tutorship of Andrew Lawrence-King and Hopkinson Smith, as well as that of her parents, Montserrat Figueras and Jordi Savall.