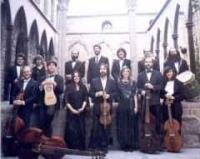 Hesperion XXI has introduced many previously unknown works to audiences across Europe and America. Frequently heard at major international festivals and on television and radio broadcasts, the ensemble has dozens of recordings on EMI, Astree, Philips. Archiv, Auvidis and now on Aliavox.

Combining the imagination of 20th-century musicians with the historical knowledge of scholars, the members of Hesperion XXI have created an ensemble that is known for its dynamic performances and bold interpretations of an astonishing range of musical literature.