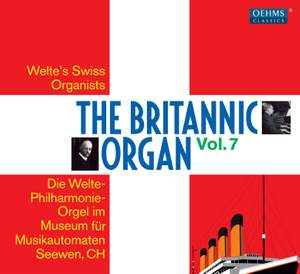 Welte Philharmonie Organ in the chapel of Meggenhorn Castle on Lake Lucerne should be mentioned here, as well as the instrument of the Museum of Music Machines in Seewen, which was intended as a Welte Philharmonie Organ for the ocean liner Britannic the sister ship of the Titanic. Both organs have survived to the present day from the early twentieth century, when they were built by the Welte company, and were restored by Kuhn organ builders, one of the leading Swiss organ building firms. Both instruments allow the recordings with the Welte Philharmonie system, also made with Swiss organists in Freiburg im Breisgau starting in 1911, to be resurrected.