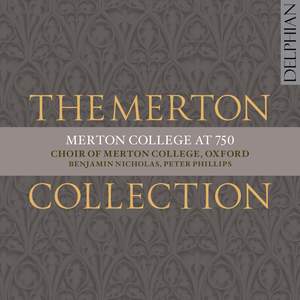 In only a few years the choir has established itself as one of the leading collegiate choirs in the UK. This, its third disc for Delphian, confirms that it is now, surely, one of the jewels in... — MusicWeb International, 12th November 2013 More…

Parry: There is an old belief (No. 4 from Songs of Farewell)

Gibbons, O: This is the Record of John

In 2014, Merton College in Oxford celebrates its 750th year. Benjamin Nicholas and Peter Phillips’ specially conceived programme journeys through three quarters of a millennium of choral repertoire. Not just a demonstration of this accomplished ensemble’s versatility, the recording also provides a bird’s-eye view of some important moments in musical history, and features two composers – John Dunstaple and Lennox Berkeley – associated with the College as well as three works specially commissioned for the anniversary celebrations. The choir, a relatively recent addition to this illustrious college’s complement of treasures, gives stylish and committed performances in the famous acoustic of Merton’s chapel.

'Advent at Merton' [DCD34122] was the best-seller on the Delphian label last Christmas. Gramophone noted "the most notable chapel choir offering" in their Christmas round-up. "All the music is radiant, all of it is unexpected...and comes from a choir that's gone from being a minor player in Oxbridge choral music to becoming one of the most exciting groups in its area". BBC Music Magazine gave it a Christmas Choice, citing "high levels of technical and expressive achievement."

In only a few years the choir has established itself as one of the leading collegiate choirs in the UK. This, its third disc for Delphian, confirms that it is now, surely, one of the jewels in that label’s crown...The singing throughout this programme is superb

Though Merton is on the cusp of its 750th anniversary, this choir is a 2006 creation, yet has quickly gained distinction. Here it offers a panorama of world musical history...But it’s the transhistorical stylistic homogeneity of choral singing that comes through.