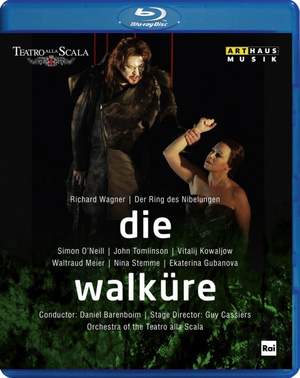 Any Daniel Barenboim Wagner performance is an event. True, his mannerisms are still apparent...but his poetic command of Wagner's phrasing tempers these...Gubanova is a steely, imperious Fricka.... — BBC Music Magazine, February 2014, 4 out of 5 stars More…

Richard Wagner called Die Walküre the “first evening” of the Ring of the Nibelung; he called Das Rheingold the prologue or Vorabend. Musically and dramatically, we are introduced to a radically new and different world when the opening bars of Die Walküre resound. A fully developed orchestral palette of Leitmotivs paints a wild storm scene, and the curtain rises on a modest dwelling: a fully human scene that has nothing to do with the gods, dwarves and nymphs of Das Rheingold. At the same time, however, the way Die Walküre portrays radical beginnings reveals some telling reminiscences of the unfolding of Das Rheingold. Die Walküre is exciting and deeply feeling drama.

The Scala “Ring” Cycle by Guy Cassiers is continued here with, as in Rheingold, numerous outstanding opera stars. Most of all, the leading ladies, ever wonderful Waltraud Meier as Sieglinde, marvellous Nina Stemme as a strong Brünnhilde and Ekaterina Gubanova as a convincing Fricka are to be named. Simon O’Neill and John Tomlinson fight a stirring duel as Siegmund and Hunding and Vitalij Kowaljow gives his dark portrayal of Wotan.

Daniel Barenboim presents a fantastic musical interpretation of this second and inspiring evening of the “Ring”.

Any Daniel Barenboim Wagner performance is an event. True, his mannerisms are still apparent...but his poetic command of Wagner's phrasing tempers these...Gubanova is a steely, imperious Fricka. Best of all, though, is Nina Stemme's Brunnhilde. It's a radiant performance, occasionally effortful, but Stemme's golden tone stands the pressure.

Meier is a tower of strength and dramatic ability just as one would expect...Stemme is properly fearless throughout as Brünnhilde...she is quite simply the best Brünnhilde since Nilsson, albeit of a very different stamp...Barenboim is a conductor at once powerful and sensitive.

Kowaljow as Wotan offers a smooth line, good top and a sense of stillness, in fact rather too much. Simon O’Neill is a tireless Siegmund and roused to dramatic heights by his outstanding Sieglinde, Waltraud Meier. Nina Stemme’s sheer presence and flood of rich tone make a strong Brünnhilde. Daniel Barenboim’s pulsing conducting is superlative.