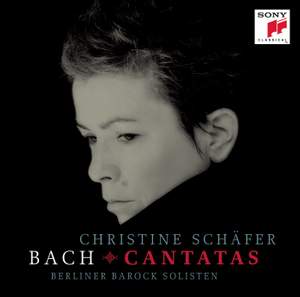 Schäfer gives an athletic account of its dance-like arias, though I find her vibrato a little intrusive...Notwithstanding Schäfer's vibrato, here is an otherwise enjoyable disc with fine woodwind... — BBC Music Magazine, February 2014, 4 out of 5 stars More…

Following the album Arias, her much-acclaimed debut album on Sony Classical, the German soprano returns to Bach with three famous cantatas she has never recorded before. Regardless of their extraordinary musical beauty all of these cantatas are concerned with religious considerations of grief, guilt and farewell. Based on the Italian model of solo cantata which reached its peak in the extensive output of Alessandro Scarlatti, these melodious and touching pieces highlight Schäfer´s outstanding vocal abilities and musical taste. The arias offer most delightful duets with various instrumental solo parts such as flute, oboe and violin. Christine Schäfer is accompanied by the Berliner Barocksolisten, a first-class ensemble of players from the Berlin Philharmonic who perform on modern instruments in historically informed style.

Christine Schäfer studied at the Berlin Conservatory with Professor Ingrid Figur, the late Arleen Augér, Aribert Reimann, Dietrich Fischer-Dieskau and Sena Jurinac and has gone on to enjoy one of the most successful international opera, concert, recital and recording careers of her generation.

Her lyric voice has graced the world’s leading opera houses and concert halls. Her repertoire encompasses opera and Lieder, Baroque and contemporary music. She is a regular performer at the Salzburg Festival and is well known to audiences from Covent Garden to the New York Met and the Opéra National de Paris. Concert appearances with renowned conductors and recitals complement her performances on the opera stage. In 2007 the magazine Opernwelt voted her “Female Singer of the Year”. She holds Germany’s prestigious Bundesverdienstkreuz and was made a member of the Berlin Academy of Arts in 2009.

Schäfer gives an athletic account of its dance-like arias, though I find her vibrato a little intrusive...Notwithstanding Schäfer's vibrato, here is an otherwise enjoyable disc with fine woodwind contributions.

The present-day pitch favoured by the Berlin ensemble assists Christine Schäfer in conveying much of [Mein Herz schwimmt]...with a near-manic desperation...The Dorian Fugue and the six-part Ricercar are beautifully played.