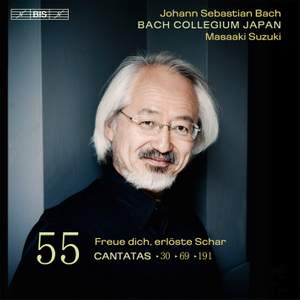 There's a striking transparency in even the densest of counterpoint...Over 18 years Suzuki seems to have subtly changed his relationship with Bach, from a reverential approach to confident familiarity.... — BBC Music Magazine, December 2013, 5 out of 5 stars More…

Recording of the Week,  Bach Cantatas from Masaaki Suzuki

18 years and 55 discs later, a great adventure is brought to a close. The chronological approach adopted by Suzuki means that the three works included here are the last extant cantatas by Bach’s hand.

This series has been a landmark recording project for BIS and is released to coincide with the label's 40th anniversary.

Throughout the series, individual volumes have regularly picked up ‘choice’ awards from the major music magazines as well as numerous appearances in the UK classical chart.

There's a striking transparency in even the densest of counterpoint...Over 18 years Suzuki seems to have subtly changed his relationship with Bach, from a reverential approach to confident familiarity. The final Cantata of this complete series is uncannily apt: 'Gloria in Excelsis' indeed!

This final volume highlights the maturing sense..of Bach Collegium Japan's growing stature and confidence to break free of generic convention towards even greater interpretative character...The best is as good as anyone anywhere

All the qualities that have made this one of the most important series of the past two decades are here, as they have been in the previous 54 volumes...[Gloria in excelsis Deo's] positioning as the final work on the final disc is apposite: the concluding chorus is a splendidly grand one to celebrate the culmination of this endeavour.

Masaaki and his performers seem to live and breathe this music and there is so much joy and immediacy in their music-making...It is simply outstanding playing, virtually faultless, and threatening on occasion to eclipse the singers, who are equally hard to fault!