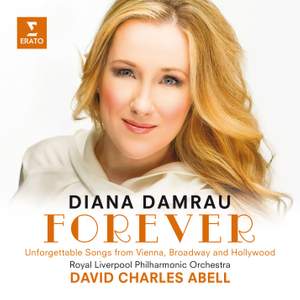 "I could have danced all night" (Eliza Doolittle)

I'm in love with a wonderful guy (Nellie)

Lloyd Webber, A: Phantom of the opera

Arlen: The Wizard of Oz

Over the Rainbow (Dorothy Gale)

"All in the golden afternoon" (Alice)

Walking in the Air

The soprano Diana Damrau stars in the operas of Mozart, Verdi, Rossini, Donizetti and Strauss, but Forever is the ‘soundtrack of her life’ in the form of much-loved numbers from operetta, musicals and the movies – including Die Fledermaus, My Fair Lady, West Side Story, The Phantom of the Opera and The Little Mermaid. “This music shows a side of me that many people don’t know yet,” she says. “These tunes are great art, because they are associated with unforgettable moments in everyone’s lives.”

Diana Damrau – lauded by the New York Times for her “lustrous agile coloratura soprano voice and charisma galore”, and by Opera News for her “exuberant glamour and emotional authenticity” – has made her name in such demanding operatic roles as Mozart’s Queen of the Night, Strauss’ Zerbinetta, Donizetti’s Lucia di Lammermoor and Verdi’s Violetta. Now, with Forever, she turns to music from operetta, musicals and the movies – including Die Fledermaus, Die lustige Witwe (The Merry Widow), South Pacific, My Fair Lady, West Side Story, The Phantom of the Opera, The Wizard of Oz and three Disney classics: Snow White, Mary Poppins and The Little Mermaid.

“This music shows a side of me that many people don’t know yet,” says Diana Damrau. “Every life has its own soundtrack and these are numbers that have had an impact on my life – and no doubt on other people’s lives too. I have tried to gather together my own memories and the collective memories of my generation. I’m a child of my time ... and I’d also like to show the world that opera singers are not confined to one genre.”

At the beginning of her career, following her studies at the conservatory in Würzburg in northern Bavaria, Damrau joined the ensemble at the city’s Mainfrankentheater. “My first role as a contract singer at the theatre was Eliza Doolittle in My Fair Lady. I must have sung the role more than 60 times, yet I never got tired of it. Eliza, the simple flower-girl can show any singer the importance of perfect phrasing, emphasis and the beauty of the text. My Fair Lady taught me the importance of recitative; of being able to sing loudly so that you can then sing softly, and of the way an aria must grow from the drama.

“This album might looks like ‘light music’,” she continues, “but I think that’s a meaningless expression. Of course the melodies are catchy and touch our feelings very directly – but for me, that’s great art. And it might make easy listening, but it’s not so easy to sing! Tunes from musicals, operettas and films need to sound light and exhilarating, or dreamy or intoxicating – and for that very reason they are very demanding vocally.”

Diana Damrau points that, when she was growing up, she enjoyed hearing major opera singers in operetta and popular music – for instance the sopranos Anneliese Rothenberger and Lucia Popp, the tenor René Kollo and the baritone Hermann Prey. “They understood that authenticity is of the essence in art – and that, I think, is the key to interpreting this kind of music: you have to take it 100% seriously. In today’s world, where we like to be ironic and deny our feelings, that is perhaps especially important.

“It’s a shame that operetta seems to have a bad reputation these days ... For me, operetta is a pure art that not only reaches our hearts, but also tells us about the errors and confusions of human life. What’s more, it provides a fine training in vocal expression ... All the arias and songs on this album form the basis on which I’ve expanded my repertoire. In recent decades singers have become more and more specialised, searching out the niches that seem to best suit our voices – but I worry that we might be losing sight of an essential aspect of music: its variety.”

The soprano points out that she has sung many of the numbers on Forever to her young sons Alexander and Colyn. “I’ve been able to tell that they like them too – that the music is timeless and not tied to any particular generation. These tunes are great art, because they are associated with unforgettable moments in everyone’s lives.”

The operetta selections are this singer's natural habitat and there's no denying the panache and brilliance of her performances. However, there's little variation in dynamic...despite some reservations, there is still much to admire in the enthusiasm and artistry of this talented and versatile singer.

Damrau is in glorious form throughout the programme and she has few superiors at the moment in lyrical roles...If the repertoire on this disc appeals to you - don’t hesitate. You won’t find much better singing anywhere today.