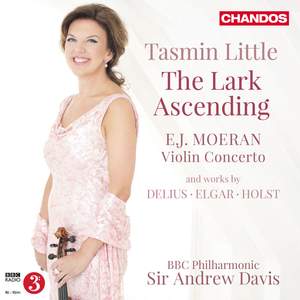 Little's stellar playing [is] brimming with gorgeous and glitz-free tone, plus a lovely range of light and shade...Little's spacious and serene way with The Lark Ascending is both beautiful,... — BBC Music Magazine, February 2014, 5 out of 5 stars More…

Moeran: Concerto for Violin and Orchestra

In this release, playing works by Vaughan Williams, Moeran, Delius, and Holst, Tasmin Little once again demonstrates her unique affinity with some of the best loved British composers of the twentieth century. She is joined by Sir Andrew Davis and the BBC Philharmonic. Little’s previous recordings of British music on Chandos have been acclaimed, Gramophone writing of her performance of Elgar’s Violin Concerto: ‘For sheer beauty of tone and expressive nostalgia, Tasmin Little and Sir Andrew Davis out-Elgar their rivals.’ E.J. Moeran composed his Violin Concerto during visits to Ireland, and it strongly reflects his love of the landscape in County Kerry. The Lark Ascending, Ralph Vaughan Williams’s much-loved romance for violin and orchestra, has long been considered a pièce de resistance for Tasmin Little, one that she is often called on to perform in concert. This disc also features three works by Elgar, all heard in arrangements by Roger Turner: Chanson de matin of 1899, its companion piece, Chanson de nuit, which features a dark-coloured main melody appropriate to its title, and Salut d’amour, one of the early works that made the composer’s name.

Little's stellar playing [is] brimming with gorgeous and glitz-free tone, plus a lovely range of light and shade...Little's spacious and serene way with The Lark Ascending is both beautiful, and beautifully unfussy. State-of-the-art sensitivity and support come from Andrew Davis and the BBC Philharmonic

Little plays [Song of the Night] with verve and panache but her most wide-ranging interpretation is reserved for the most substantial work on this disc, Moeran's magnificent and entirely personal Violin Concerto...evoked with conviction by Little's flair and clarity...A sumptuous offering all round!

This is an exceptionally fine disc, recorded in excellent sound by the Chandos engineers. Tasmin Little here gives us, surely, the finest available recording of the Moeran concerto. There are so many recordings of The Lark Ascending that it’s a brave man who would say this version is the best in the catalogue: I’m going to be brave.

Little brings her customary charm and delicacy to these Elgarian bonbons, here arranged for violin and orchestra and accompanied by Sir Andrew Davis and the BBC Philharmonic.