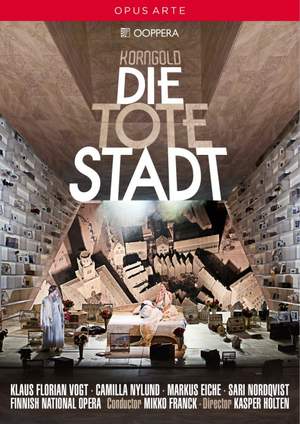 Holten's staging for the Finnish National Opera is inventive - sometimes startlingly so - but doesn't overload the narrative with imposed extra concerpts. He allows the drama...to shine...[Vogt's]... — BBC Music Magazine, January 2014, 4 out of 5 stars More…

Die tote Stadt may be better known for the lushly orchestrated lyricism of its music, but the psychological acuity of its exploration of grief and memory is no less impressive from a composer who was still 23 when no less than Otto Klemperer conducted the premiere in Cologne in 1920. Korngold's gift for a tune ensured that his star has hardly waned since then, though the opera is rarely staged: Kasper Holten's insightful and restrained production is a rare chance both to see and hear an opera of high emotional charge heightened by the dark cityscape of its title. A superb cast is directed by Finnish National Opera's artistic director Mikko Franck, who is celebrated for his impassioned interpretations of Romantic opera.

Written when Korngold was only 23, premiered in 1920 (in Hamburg and Cologne) – conducted by Otto Klemperer (Cologne), but rarely performed now.

Korngold was a musical prodigy, hailed as a genius by Gustav Mahler.

Korngold was acclaimed across Europe for his operatic and orchestral works. He moved to the US in 1934 and became one of the greatest film composers of the “Golden Age” of Hollywood.

This production directed by Kasper Holten, now Director of Opera at the Royal Opera House.

Features Klaus Florian Vogt, one of Germany’s leading tenors, as Paul, and Camilla Nylund as Marietta.

there is no audible sign that this not-so-mini Tristan of a role is too heavy for Klaus Florian Vogt's tenor, while Camilla Nylund's Marietta/Marie...is in dream form, untiring, concentrated, rapturous of tone. A huge achievement. The orchestra encompass this far from easy (and, surely, unfamiliar) score with great panache for their chief.

Kasper Holten plays up the disturbing psychological aspects of the work, and there is some ravishing singing from Camilla Nylund as Marietta.