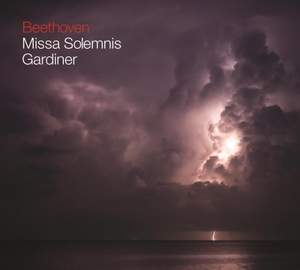 it's not difficult to understand why Gardiner wanted this particular performance perpetuated: fine as the Archiv version is, the new one has an electricity of a kind that's hard to generate under... — BBC Music Magazine, April 2014, 5 out of 5 stars More…

“Performed to perfection and brought into new, terrifying life” – The Times *****

“A daringly coloured account, exuberant physicality... There was hardly a passage that did not show the result of Gardiner’s hallmark intelligence and audacity” – The Guardian *****

“Nothing short of rapid-fire choral entries will do, and the Monteverdi sopranos duly shone in their ecstatic embrace of the stratosphere –The Financial Times *****

This album was recorded live at the Barbican in 2012. It features soloists Lucy Crowe (soprano), Jennifer Johnston (mezzo), James Gilchrist (tenor), Matthew Rose (bass). Sir John Eliot Gardiner offers a daring reading of this piece. The ORR’s performance on period instruments is virtuosic and colourful; the Monteverdi Choir contributes arresting chorus parts. Composed “from the heart”, Beethoven’s epic Mass has been described a statement of highly personal religious faith. It is rarely heard in concert due to the large forces required and the exacting demand it places on all performers.

The album is packaged in a digipack and contains a 36-page booklet with original notes by BBC presenter and music journalist Stephen Johnson.

it's not difficult to understand why Gardiner wanted this particular performance perpetuated: fine as the Archiv version is, the new one has an electricity of a kind that's hard to generate under studio conditions.

Such is the visceral intensity of the music-making, a certain girding of the loins may be required before a second hearing, but isn't that precisely how it should be with a work of this power and magnitude?

the whole performance is in almost all respects a triumph. The choir and orchestra are superbly drilled, and apart from occasional sharpness in some of the soloists' parts they too are first-rate.

I think that the 2012 reading transcends even the 1989 recording. For a start the orchestral playing is excellent...The contribution of the Monteverdi Choir is simply magnificent...The members of the solo quartet are individually excellent and also make a fine team...a powerful and superbly executed account of Beethoven’s choral masterpiece.

Gardiner’s live 2012 recording from the Barbican is faster and even more radical than his 1990 studio recording, with punchier choral articulation. But it, too, captures the desperate urgency and almost unbearable emotional intensity of this supreme work