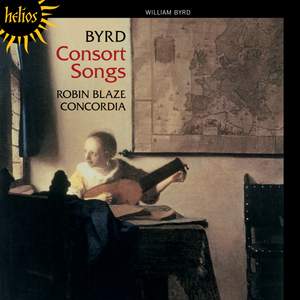 Byrd: Rejoice unto the Lord

Byrd: O dear life, when may it be

Byrd: Come to me, grief, for ever

Byrd: Who likes to love

Byrd: O that most rare breast

Byrd: All as a sea

Byrd: How vain the toils

Here is a fine recording to draw the listener into the richly layered world of Queen Elizabeth I. William Byrd’s ‘consort songs’ tell of courtly love; Sir Philip Sidney’s demise in battle becomes an eloquent lament; an old woman tumbling down amid a flurry of human skulls represents contemporary desires for freedom of speech; moral temptations are likened to a storm-tossed ship; and a hymn to the Muses is inspired by the death of Thomas Tallis.

The longest single piece here is Byrd’s famous Lullaby ‘My sweet little baby’, one of the most popular of his works during the composer’s lifetime, and one which has been a deserving favourite ever since. Despite Byrd’s domestic-musician-flattering preface in which he claimed these works were designed to persuade ‘everyone to learn how to sing’, this music makes the highest vocal demands: demands far exceeded in the glorious singing of Robin Blaze.

Blaze continues to chart new territories of vocal expression. Blending purity with confidence, he draws on his vocal strengths—effortlessly sustained legato, delicate pianissimos, crisp declamation—to starkly varied effect, depending on the context of each song … in this marriage of technical mastery
and instinctive understanding, Byrd’s complex psychology stands revealed

Blaze is on superb form in this recording, his clear, unpretentious sound an ideal partner for Concordia … very satisfying it is too. Any chance of mo e
of the same, Hyperion?

The touching lament Ye sacred muses links Byrd and Tallis closely, being written by the former as an elegy on the death of the latter and ending with the thought that 'Tallis is dead, and music dies'. Robin Blaze's effortless countertenor singing is perfectly suited to these works.

Blessed with a most alluring countertenor—creamy in tone, naturally expressive, exquisitely controlled—Blaze is the perfect singer for Byrd’s consort songs … Blaze delivers with a refinement any great lieder singer would be hard pushed to exceed

These songs are pure heaven: melancholic and moody, sweet and sad, Blaze—supported by the excellent viol consort Concordia (with Elizabeth Ken
providing lute accompaniment)—captures their heart with deceptive ease. A lovely release