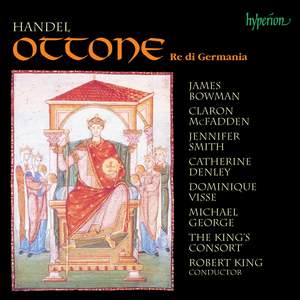 Handel’s Ottone was one of the most popular operas of the composer’s career, with 34 known performances during his lifetime, beaten only by the 53 performances of Rinaldo. The premiere run in 1723 featured superstar Italian soloists including Senesino and Cuzzoni, and coincided with (and was perhaps the cause of) the height of London’s opera madness, with tickets changing hands for increasingly high prices on the black market. This recording of the 1723 version (Handel adapted the opera in later years for different singers) features James Bowman at the peak of his powers in the title role.

Ottone is, even for Handel, unusually rich in lovely, heartrending arias