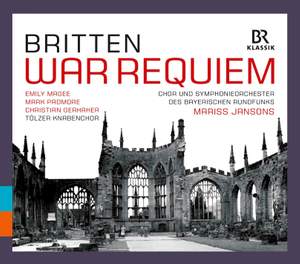 This release commemorates the life of the English composer Benjamin Britten, who would have celebrated his 100th birthday this year. Britten, who in May 1942 refused to fight in World War II, began working in 1960 on a "War Requiem". In March of this year, during the performances by the Bavarian Radio Symphony Orchestra under Mariss Jansons, the work delivered its shattering impact once again – due not only to the Tölz Boys' Choir but also an outstanding trio of soloists.

Jansons brings a powerful sense of momentum...Gerhaher brings his shamainstic focus to key moments...Magee is fiery and imperious

Padmore always makes verbal poetry, despite some shortness of breath...Gerhaher, singing in excellent English, is simply outstanding - powerful, supremely expressive and unforgettable in the intensity that he creates in 'Strange Meeting'.