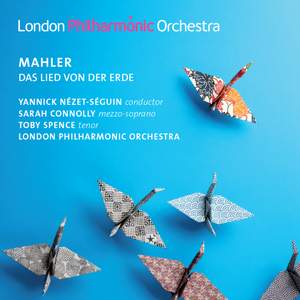 one smudged turn apart, the orchestral playing is perfect, the crucial oboe, flute and clarinet solos the best I've heard. Nezet-Seguin's vision is suitably hyperaesthetic - he is already an... — BBC Music Magazine, January 2014, 3 out of 5 stars More…

LPO Principal Guest Conductor Yannick Nézet-Séguin has a great affinity with the German Romantic repertoire. His previous LPO Label disc, Brahms’s Ein deutsches Requiem, received great critical acclaim and is one of the most popular discs on the label.

In Das Lied von der Erde (The Song of the Earth), Mahler married together for the first time the lyricism of the song-cycle and the formal ambition of the symphony, describing it as ‘probably the most personal composition I have created thus far’.

one smudged turn apart, the orchestral playing is perfect, the crucial oboe, flute and clarinet solos the best I've heard. Nezet-Seguin's vision is suitably hyperaesthetic - he is already an idiomatic Mahler conductor, so imagine what he'll be like in ten years' time.

This strikes me as the real deal...The players, on top form, are participants rather than accompanists...For all that [Spence's] timbre is unmistakeably English, on CD at least he is never drowned out and there is much sensitivity too. What can there be left to say about Sarah Connolly, whose performances these days are pretty much beyond praise?

it finds the tenor Toby Spence in ringing voice for the demanding Drinking Song...[Connolly] has rarely sung with such limpid beauty...Nézet-Seguin perfectly captures the yearning for lost youth and resigned acceptance of mortality that pervades Mahler’s masterpiece.