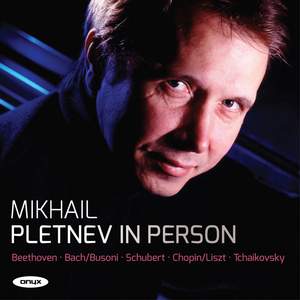 Sensational. Unique. In a realm all their own. Now words are really apt here...The most obvious feature of the playing here is the artist's unfettered imagination - a currently unfashionable... — BBC Music Magazine, January 2014, 5 out of 5 stars More…

A treat for fans of Pletnev the pianist and piano enthusiasts. Recorded in single takes in between sessions for other recordings but with the red light left on, these performances capture one the great pianists of our time simply playing for himself. Never before released, the performances and recordings have been approved by Mikhail Pletnev for release.

The Beethoven sonata is a work he has not recorded before, and the Bach/Busoni Chaconne recording pre-dates his famous ‘Live from Carnegie Hall’ album. The Schubert Impromptus were recorded at Rachmaninov’s villa in Switzerland on the composer’s own Steinway. This CD allows us to eavesdrop on a great artist playing for pleasure – for himself whilst the recording technicians busied themselves with the ‘official’ recording. The spontaneous nature of the playing is captivating and, as always with Pletnev, exciting.

Sensational. Unique. In a realm all their own. Now words are really apt here...The most obvious feature of the playing here is the artist's unfettered imagination - a currently unfashionable commodity. In the end though, this is the least of it. Pletnev simply sees in the score essentials which most musicians miss.

The long line is Pletnev's starting point. However undulant he feels it need be, however delicate or powerful he feels it need be, it is always an integral part of the form and rhythm of a piece...the kind of musicianship that makes the odd foible irrelevant, even meaningless.

This disc is a reminder of what we've been missing and of the qualities that make him a leading pianist of our time...The playing is wonderfully alive, sometimes dazzling. As ever with Pletnev, there are details that won't be to all tastes...But there's no doubting the inquiring musical mind behind it, or the quality of the pianism