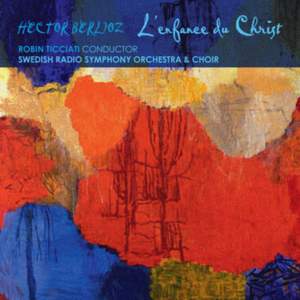 Robin Ticciati’s Berlioz recordings have received many accolades: Critics' Choice 'Sound of 2012' (The Independent), 'Classical CD of the Week' (Sunday Times), 'Disc of the Week' (BBC Radio 3 'CD Review'), No. 3 in The Sunday Times’ Best Classical Albums of 2012 list and ‘Recording of the Month’ (Gramophone).

Ticciati cements his reputation as an outstanding Berliozian with his latest recording, L’enfance du Christ, featuring the Swedish Radio Symphony Orchestra and Chorus.

Ticciati is a regular guest conductor of the Swedish Radio Symphony Orchestra, widely considered to be one of Europe’s leading orchestras. The SRSO has won many Swedish and international awards including a GRAMMY and has made several GRAMMY-nominated recordings.

The SRSO Chorus are a phenomenal ensemble; one of the best large-scale choruses in Europe.

Ticciati avoids any longeurs or clumsy transitions between the tableaux, taking the Shepherds' Farewell at a true allegretto, thereby making the slower, final verse all the more poignant...The highlight, though, is the exquisite singing of the lady angels

Ticciati’s direction of the score is very sure footed; he conveys the nuances of this very subtle score and he also puts across its spirit very well....this set offers further evidence of [his] impressive credentials as a Berlioz interpreter.

The famous ‘Shepherds’ Farewell’ is testimony to Ticciati’s ability to make Berlioz sound fresh rather than bloated: it receives a beautiful, schmaltz-free performance...Gens is a luminous, very human Mary, heart-breaking in her anxiety and physical frailty after the Flight from Egypt, whilst Alastair Miles excels in his two contrasting roles.

This is as fine a performance of Berlioz’s triptych as I have heard. Its delicacy of colour is matched by its expressive intensity. Under Ticciati’s direction, the excellent Swedish choir and orchestra capture the essence of the work

this new [recording] is beautifully fluid, flexible and transparent. Robin Ticciati and his soloists shape the lines responsively and warmly...Beuron here has warmth and vivid drama...the Swedish Radio Choir is truly transcendent in the ethereal apotheosis.

The Swedish Radio Choir sings with terrific gusto...Right from the opening bars, with those strange, harmonium-like sonorities that the woodwind produce, you have complete confidence that Ticciati understands the Berlioz hinterland...a first-rate, affecting performance and a timely seasonal release.

Ticciati’s best contributions to the score are his unfussy approach and steady pace...In colouring or phrasing, nothing is overdone...Gens, warm and tasty as toast, gives us a Mary of flesh, blood, and supple beauty...All in all, this is a release fit for anyone’s Christmas stocking.