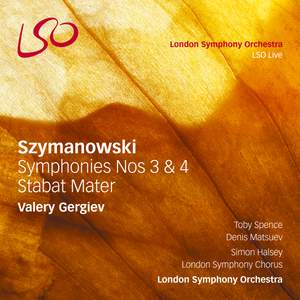 Matsuev has his feet...firmly planted on terra firma, the edgier writing displaying more of a kinship with Bartok until the gorgeous return to lushness in the second movement suggests an almost... — Gramophone Magazine, November 2013 More…

For decades Szymanowski’s music was rarely heard outside Poland. Today, he is recognised as one of Poland’s greatest musical figures. His desire to embody the music of his native land and his incorporation of the folkloric sounds of the Polish mountains make his orchestral works a must for anyone with an interest in Polish culture and music.

Szymanowski’s Third Symphony is a musical setting of a 13th-century poem written during his second, Franco-Arabic period and combines the influences of Wagner, Chopin and Scriabin. The 'Stabat Mater' is derived from poet Józef Jankowski’s translation of the medieval poem about the grieving mother of Christ. Symphony No 4, one of Szymanowski’s last compositions, was dedicated to Arthur Rubinstein and is a piano concerto in all but name.

In September Valery Gergiev will travel to Rotterdam for the Rotterdam Phiharmonic Gergiev Festival, before opening The Met season with 'Eugene Onegin'. In October Gergiev will commence his Berlioz cycle with the LSO, with performances in the UK, Germany, France and Austria.

Matsuev has his feet...firmly planted on terra firma, the edgier writing displaying more of a kinship with Bartok until the gorgeous return to lushness in the second movement suggests an almost Ravelian sensibility. Certainly Matsuev and Gergiev go all out to turn the finale into Szymanowski's danse generale.

The [Stabat Mater] is beautiful and Gergiev has the full measure of its 23 gorgeous minutes.