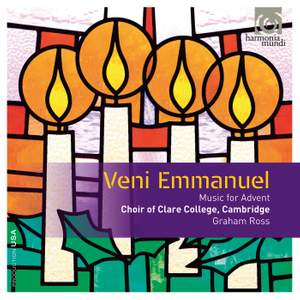 This is a marvellous programme of Music for Advent and it is executed superbly by the Clare College Choir. It’s obvious that the standard built up during Timothy Brown’s long leadership, especially,... — MusicWeb International, November 2013 More…

Howells: The fear of the Lord

Rutter: Hymn to the Creator of Light

Mendelssohn: There shall a star from Jacob (from Christus)

Ross, Graham: I sing of a maiden

Tavener: God is With Us (A Christmas Proclamation)

As Christmas draws near, David takes a look at music written for the season of Advent.

The familiar hymn 'Veni Emmanuel' is emblematic of the Advent season – a period of reflection upon the meaning of Christ’s coming. Framing this programme, the hymn paraphrases the great ‘O’ Antiphons: plainchant settings traditionally sung on the days leading up to Christmas; complemented here by later works echoing their rich imagery and symbolism.

Founded in 1971, the Choir of Clare College has gained an international reputation as one of the leading university choral groups in the world. Beyond its primary function of leading services three times a week in the College Chapel in Cambridge, the Choir maintains an active schedule recording, broadcasting and performing worldwide.

In addition to live performances the Choir has produced an impressive discography. The Choir’s CD of John Rutter’s 'Requiem', also produced by the composer as is this disc, was awarded Editor’s Choice by Gramophone, amongst other accolades. The Choir’s partnership with harmonia mundi includes recordings of Handel’s 'Messiah', Blow’s 'Venus and Adonis', with René Jacobs, and, most recently, world première recordings of choral works by Imogen Holst, hailed for "impeccable ensemble" and "thrilling performances".

This is a marvellous programme of Music for Advent and it is executed superbly by the Clare College Choir. It’s obvious that the standard built up during Timothy Brown’s long leadership, especially, has been fully maintained by Graham Ross.

it’s an eclectic collection, and on paper it did look as if some of the stylistic juxtapositions might be a little jarring. I stand corrected: woven into a seamless whole with connecting plainchant, the entire sequence seems to develop organically...the Clare choir do pianissimo to perfection, and indeed the singing throughout is superb.

Tavener’s flair for drama is here; so are the influence of the Russian Orthodox liturgy and his gift for writing melodies and harmonies that are hard to shake off. The rest of the programme is attractive enough, but among the Howells, the Rutter and Rachmaninov, Tavener’s five minutes act like a bolt of lightning...Here is music with the power to transform your life.