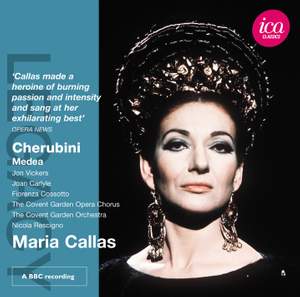 [This version] would have small claims to be authentic...What is authentic is the passion and intensity that Callas brings to would become one of her greatest roles...The supporting cast is equal... — BBC Music Magazine, December 2013, 4 out of 5 stars More…

Maria Callas (1923–1977) was one of the most renowned opera singers of the twentieth century. Critics praised her bel canto technique, wide-ranging voice and dramatic gifts. Her repertoire ranged from classical opera seria to the bel canto operas of Donizetti, Bellini and Rossini; further, to the works of Verdi and Puccini; and, in her early career, to the music dramas of Wagner. Her musical and dramatic talents led to her being hailed as La Divina.

Her dramatic life and personal tragedy have often overshadowed Callas the artist in the popular press. However, her artistic achievements were such that Leonard Bernstein called her ‘The Bible of opera’, and her influence was so enduring that, in 2006, Opera News wrote of her: ‘Nearly thirty years after her death, she's still the definition of the diva as artist – and still one of classical music’s best-selling vocalists.’

Callas first performed Cherubini's Medea in 1953 and then again in the 1953–4 La Scala season with Leonard Bernstein. She continued to perform Medea during the 1950s and 1960s, most famously in Dallas and in London in 1959 conducted by Nicola Rescigno and featuring the young Jon Vickers.

This recording of the performance on 30 June 1959 at the Royal Opera House received rave reviews. The Times wrote of the first night (June 17), ‘It is this play of conflicting, oscillating, burning feelings that is the core of the opera … and it is this fluctuation which Callas can convey with unique art.’ George Mayer in the American Record Guide wrote, ‘Callas builds her performance into one powerful line of increasing tension. It is the kind of performance which spoils one for anything less from the opera stage.’

Other versions of the Covent Garden Medea exist but ICA Classics have very carefully remastered some new tapes which have produced excellent sound for their period.

ICA Classics’ recording of Verdi's La traviata with Callas (ICAC5006) is now considered by the critics to be her best version on the market.

[This version] would have small claims to be authentic...What is authentic is the passion and intensity that Callas brings to would become one of her greatest roles...The supporting cast is equal to the best, with tenor Jon Vickers an outstanding Jason and soprano Joan Carlyle a lovely Glauce.

[Vickers sings] with a tonal beauty not always present in his later Siegmunds, Tristans and Samsons. Callas herself...is in terrific form in a role whose lower tessitura was beginning to suit her well...The support is strong...A worthwhile addition to the historical catalogue in as good a sound as possible.

Callas herself gives little evidence of any vocal deterioration...she is suffering womanhood incarnate. The whole is expansively and dramatically conducted by Rescigno...If you don’t already own the Dallas performance, this is the one to have if you want to hear La Divina in finest form in a favourite role and worthily accompanied.