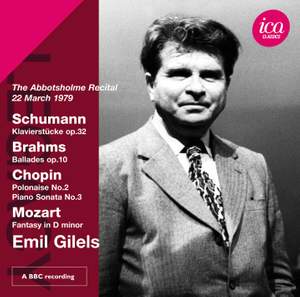 The pianist endows these pieces with dignified maturity and a sense of poetry...the performances complement those studio accounts by reflecting Gilels's palpable engagement and desire to communicate... — BBC Music Magazine, December 2013, 4 out of 5 stars More…

After completing his studies with Heinrich Neuhaus in 1937, he was awarded first prize at the 1938 Ysaÿe International Festival in Brussels. After the Second World War, he toured the Soviet Bloc countries of Eastern Europe as a soloist.

He was one of the first Soviet artists, along with David Oistrakh, to be allowed to travel and give concerts in the West. His US debut, in 1955 playing Tchaikovsky’s Piano Concerto No.1, was a triumph. His UK debut in 1959 was met with similar acclaim, while his Salzburg Festival debut came in 1969. Emil Gilels is regarded by many as one of the most significant pianists of the twentieth century and is universally admired for his superb technical control and burnished tone. His interpretations of the central German-Austrian classics formed the core of his repertoire, in particular Beethoven, Brahms and Schumann, as well as twentieth-century composers such as Debussy, Bartók and Prokofiev.

This authorised BBC tape has never been issued before. The recital is slightly unusual in that Gilels opens with Schumann’s rarely heard Four Klavierstücke op.32. Gilels only performed these pieces late in his career from 1977 to 1984.

Similarly, the Brahms Ballades op.10 were only played by Gilels from 1975 for five years and then dropped. The Chopin Polonaise No.2 in C minor op.40 was likewise played in the mid-1960s but then became a rarity. And finally Gilels played Chopin’s Third Piano Sonata for the first time as late as 1977.

This is an exceptionally rare CD and presents the great Russian pianist at his best in a relaxed, informal atmosphere. There is a beautifully played encore – Mozart’s D minor Fantasy K397 – which is also featured on this very well-filled 80+ minute-disc.

The pianist endows these pieces with dignified maturity and a sense of poetry...the performances complement those studio accounts by reflecting Gilels's palpable engagement and desire to communicate with his audience.

Gilels shows how acutely sensitive performance can be, how malleable interpretation can be, and how an artist’s perception of a myriad of small or larger details can incrementally shape the course of his performance.

[the Chopin pieces] serve as reminders that Gilels' keyboard muscularity was always complemented by a wonderfully even, silvery delicacy when required...The encore is Mozart's D minor Fantasy, a bit over-emphatic for my taste, but the pianism is, as ever, masterly.