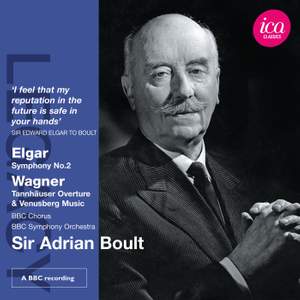 what treasure-trove it comprises...Not only do the BBC SO play with heartfelt commitment...but the 88-year-old Boult directs with unerring grip and thrusting vigour...So where's the rub? Well,... — Gramophone Magazine, December 2013 More…

Sir Adrian Boult (1889–1983) studied in England and at Leipzig, Germany, with early conducting work in London for the Royal Opera House and Sergei Diaghilev’s ballet company. His first prominent post was conductor of the City of Birmingham Orchestra in 1924. When the British Broadcasting Corporation appointed him director of music in 1930, he established the BBC Symphony Orchestra and became its chief conductor. The orchestra set standards of excellence (famously conducted by Toscanini) that were rivalled in Britain only by the London Philharmonic Orchestra (LPO), founded two years later.

After leaving the BBCSO in 1950, Boult took on the chief conductorship of the LPO and under his guidance its fortunes were revived. He retired as its chief conductor in 1957. In the latter part of his career he worked with other orchestras, including the London Symphony Orchestra, the Philharmonia Orchestra, the Royal Philharmonic Orchestra, and his former orchestra, the BBC Symphony, conducting them in concerts and recordings until 1978, in what was widely called his ‘Indian summer’.

This live Proms performance recorded in stereo from 1977 ‘shows Boult in his late eighties working with the passion and energy of a much younger man’ (Martin Cotton). His relatively fast tempi are closer to his first recording made in 1944 with the BBCSO.

Elgar wrote to Boult ‘I feel that my reputation in the future is safe in your hands’ following a performance of his Symphony No.2.

The Overture and Venusberg Music from Wagner’s Tannhäuser are a new addition to the Boult discography and come from a live studio performance in stereo from the Maida Vale Studios in 1968.

Gramophone described ICA's recording of Boult's live performance of Elgar’s Symphony No.1 (ICAC5063) as ‘Boult at his inimitable best’.

what treasure-trove it comprises...Not only do the BBC SO play with heartfelt commitment...but the 88-year-old Boult directs with unerring grip and thrusting vigour...So where's the rub? Well, the boomy, cavernous sound leaves a lot to be desired...if you can contend with the problematic sound, there's heaps to admire here on purely artistic grounds.