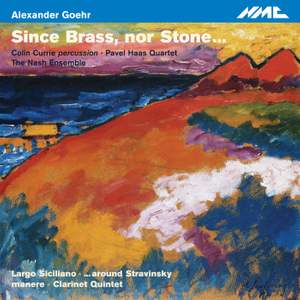 Alexander Goehr: Since Brass nor Stone

These performances render the sound worlds of Goehr's sources so consummately that his own twists and turns through them come through persuasively. — Gramophone Magazine, November 2013 More…

This new recording of Goehr's chamber music, written between the years of 2002-2012 and featuring artists critically hailed as 'chamber music royalty' (The Nash Ensemble - Sunday Times), 'one of the most polished and musically exciting young string quartets in the world today' (Pavel Haas Quartet - Washington Post) and 'a miracle of cool-headed brilliance' (Colin Currie - Daily Telegraph) cannot fail to delight.

The title work, Since Brass nor Stone, is inspired by Shakespeare's 65th Sonnet – a poem concerned with the ravaging effects of time on the physical world – and begins rather comically with a literal play of the opening line 'Since brass, nor stone, nor earth, nor boundless sea', with Chinese gong and bell tree, followed by stone drum, and log drum to lion's roar and rainstick, all in the space of the opening four bars. The combination of percussion with string quartet is an unusual one but Goehr successfully balance the timbres with some remarkably striking and technically diffi cult writing for both. ... around Stravinsky is inspired by Stravinsky's Pastorale with Goehr's Prelude and Rondo written to be performed either side of it. The Quintet for Clarinet and Strings motet-like structure is influenced by a Josquin des Prez mass and themes from it can be heard throughout the work. The duo for clarinet and violin, Manere, is based on a medieval plainchant, built into a series of rhapsodic and free-fl owing variations and the most recent piece on this recording – Largo Siciliano, for horn, violin and piano - uses the dotted rhythm of the Baroque dance, taken through a series of transformations which explore the timbres of the three instruments before returning to the original stately Siciliano.

These performances render the sound worlds of Goehr's sources so consummately that his own twists and turns through them come through persuasively.

They reveal the typical preoccupations of Goehr's recent music, especially his fascination with revisiting the music of the past...[Colin Currie and the Pavel Haas Quartet bring 'Since Brass, Nor Stone'] off brilliantly, creating an arresting sound-world of immense rhythmic variety and surprise.