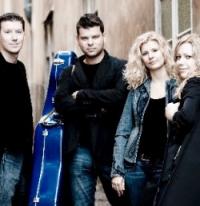 The Pavel Haas Quartet was founded in Prague in 2002 by violinist Veronika Jarůšková; the original line-up consisted of Jarůšková, second violinist Kateřina Gemrotová, viola-player Pavel Nikl and cellist Lukáš Polák, but Jarůšková’s husband replaced the latter early on in the ensemble’s career. In 2005 the group won the Prague Spring Competition, and signed with Czech label Supraphon shortly afterwards; their debut recording (of Janáček’s Intimate Letters and Haas’s From the Monkey Mountains) won the chamber music category at the 2007 Gramophone Awards and the Best Newcomer prize at the BBC Music Magazine Awards. Their discography also includes Dvořák’s String Quartets Nos. 12 and 13 (Gramophone’s Recording of the Year in 2011), his Piano Quintet No. 2 and String Quintet Op. 97 (with former member Nikl returning as a guest), Smetana’s string quartets (winner of the chamber music category at the 2015 Gramophone Awards and 2016 BBC Music Magazine Awards), Prokofiev’s String Quartets Nos. 1 & 2 (‘a performance of tremendous musical energy: robust, well characterised and exact’ - The Independent on Sunday), and Schubert’s Death and the Maiden and String Quintet (‘scalding to the touch’ - The Sunday Times).

Recording of the Week,  Shostakovich from the Pavel Haas Quartet

The serial award-winners surpass even their own high standards with searing accounts of the Second, Seventh and Eighth String Quartets on Supraphon.

Three members of the Quartet share their thoughts on their new album and their upcoming recital and recording plans...