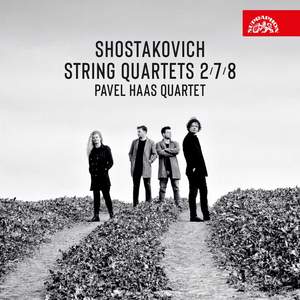 Shostakovich’s Second Quartet is remarkable for its sheer insistence...The Pavel Haas register all this to the nth degree, and I would have been inclined to hail this one of the finest of all... — Gramophone Magazine, November 2019 More…

Recording of the Week,  Shostakovich from the Pavel Haas Quartet

The serial award-winners surpass even their own high standards with searing accounts of the Second, Seventh and Eighth String Quartets on Supraphon.

Three members of the Quartet share their thoughts on their new album and their upcoming recital and recording plans...

Shostakovich – his music is a challenge each and every quartet sooner or later has to face up to. Yet when it comes to the Pavel Haas Quartet, it seems to be in their very DNA. The ensemble’s unbridled, impulsive and, now and then, frenetic energy, sense for extreme contrast, ability to bring to bear gradation from breath-taking subtlety and tenderness to symphonic drama are facets essentially incident to Shostakovich’s music.

Although composed in safety, away from the horrors of World War II, String Quartet No. 2 (1944) reflects the suffering, uncertainty and anxiety of living at the time (the lyrical recitative of the second movement, as performed by Veronika Jarůšková, the first violin). Both dating from 1960, String Quartets Nos. 7 and 8 are truly intimate confessions. While Shostakovich dedicated the former (the shortest piece of the cycle) to the memory of his first wife, he most likely intended the latter as his own epitaph, at the time when be hovered on the thin line between life and death. Attesting to the autobiographical nature of String Quartet No. 8 is the opening DSCH motif, Shostakovich’s musical signature, which reoccurs throughout the piece.

Shostakovich’s Second Quartet is remarkable for its sheer insistence...The Pavel Haas register all this to the nth degree, and I would have been inclined to hail this one of the finest of all recorded accounts had they only brought more coiled tenseness to the shadowy outer sections of the Waltz third movement.

What we have here is one of the bleakest and most beautiful recordings of the year, with all three quartets (particularly the much-recorded No. 8) approached with an immediacy that would make you swear that the ink was barely dry on the page. They can summon a massive, quasi-orchestral sound when required, so much so that there were moments in the Eighth Quartet when I was convinced I was listening to the piece in Rudolf Barshai’s arrangement for string orchestra.

The Czech players are always worth hearing, especially in their angst-ridden account of the biographical C minor quartet (No 8), but also in the forlorn, if fleeting, F sharp minor (No 7), written in memory of his first wife. Their account of the Second Quartet, in A major, is spacious, intense and symphonically conceived.