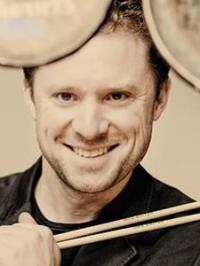 The Scottish percussionist Colin Currie was born in 1976 and studied at the Junior Royal Scottish Academy of Music and Drama, becoming the first percussionist to make the finals of BBC Young Musician of the Year in 1994 shortly before taking up a place at the Royal Academy of Music. Early successes included the Royal Philharmonic Society’s Young Artist Award (2000), and a BBC Radio 3 New Generation Artist position from 2003-2005. Currie specialises in contemporary music, and has given the first performances of works by composers including Helen Grime, Einojuhani Rautavaara, Mark Antony Turnage, Nico Muhly and sir Harrison Birtwistle.

His ensemble Colin Currie Group specialises in the music of Steve Reich, and has won critical acclaim for its recordings of Drumming (on the group’s own label) and Quartet (on Nonesuch); Currie’s discography also includes Elliott Carter’s 2 Controversies and a Conversation, Sir Richard Rodney Bennett’s Marimba Concerto with John Wilson and the BBC Scottish Symphony Orchestra, The Scene of the Crime with trumpeter Håkan Hardenberger, Jennifer Higdon’s Percussion Concerto, and numerous recordings of Sir James MacMillan’s Veni, veni, Emmanuel.

Find out more at https://en.wikipedia.org/wiki/Colin_Currie

Interview,  Colin Currie on The Scene of the Crime